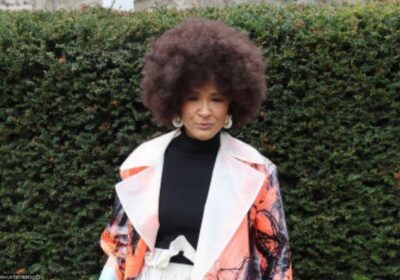 The actress, who is known for her role as Queen Charlotte on the hit Netflix series, claims in a new interview that the ‘bizarre’ advise from an unnamed director makes her ‘really confused.’

AceShowbiz –Golda Rosheuvel was told not to come out by a lesbian director. The 52-year-old actress, who is best known for her role as Queen Charlotte in Netflix hit “Bridgerton“, was advised against disclosing her sexuality publicly and was left feeling “confused” because she was already out to family and friends.

Without naming the director, she said, “I really admired her and I was really confused. This is really bizarre. How come I can be out privately to my family, to my friends every day, but there’s something about being professionally out and publicly out. We were talking about being out and proud and representation and whether I should say I was gay in interviews. And it was an absolute no.”

The West End star, who is in a long term relationship with writer Shireen Mula, claimed that the director told her she would “ruin her career” if she revealed her sexuality to the world but insisted that she would “rather not be” in showbusiness if it meant not being true to herself.

Speaking on the “Just For Variety” podcast, she added, “[She said to me] ‘You absolutely shouldn’t do that. It could or it would ruin your career as an actor. ‘I would rather lose a job than not be true to who I am. I’d rather not work in an industry that doesn’t accept me. It just wasn’t how I was raised. And then her being out as a female director, as a lesbian director, I was like, ‘I don’t understand this advice. I just don’t understand. It just doesn’t track!'”

Golda explained that “representation” in whatever form is important as she insisted that she is “out and proud” and is just as important as anyone else.