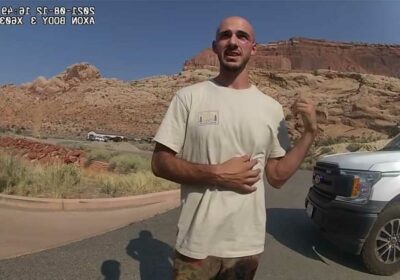 Authorities have used dental records to identify the remains of Brian Laundrie, a person of interest in the murder of his fiancée Gabby Petito. Laundrie was missing for more than a month before his remains were found in the Carlton Reserve in North Port, Florida, earlier this week, the Tampa FBI announced Thursday. Laundrie was also wanted by the FBI for debit card fraud.

“On October 21, 2021, a comparison of dental records confirmed that the human remains found at the T. Mabry Carlton, Jr. Memorial Reserve and Myakkahatchee Creek Environmental Park are those of Brian Laundrie,” the FBI said in a statement. No cause or manner of death has been announced yet. The FBI did not comment on the status of Petito’s investigation.

A Woman Went Missing While Camping. Then Her Husband Confessed to Her Brutal Murder

On Wednesday, October 20th, officials announced they had found partial human remains in the Carlton Reserve, as well as some personal items — including a notebook and a backpack — belonging to Laundrie at Myakkahatchee Creek Environmental Park that adjoins the nature reserve. Authorities proceeded to block the entrance to the park and the Sarasota County Medical Examiner’s Office was called in, according to Tampa-based NBC affiliate WFLA.

Per a statement from the Laundrie family’s lawyer, Steve Bertolino, Laundrie’s parents, Chris and Roberta, had gone to the park that morning to search for Laundrie. “The FBI and NPPD were informed last night of Brian’s parents’ intentions and they met Chris and Roberta there this morning. After a brief search off a trail that Brian frequented, some articles belonging to Brian were found. As of now, law enforcement is conducting a more thorough investigation of that area.”

Laundrie, 23, left New York with Petito, 22, on July 2nd in a Ford Transit van for what was supposed to be a four-month-long road trip through National Parks. On September 1st, however, Laundrie returned alone with the van to his parents’ home in North Port, Florida, where he and Petito had been living. Petito’s family reported her missing on September 11th. Laundrie hired Long Island attorney Steven Bertolino and refused to answer questions about Petito’s whereabouts. Then, on September 17th, Laundrie’s parents told authorities he had gone missing, too. Two days later, authorities found Petito’s remains near a Wyoming campground. An examination determined the manner of death was homicide.

After the discovery of Petito’s remains, an all-out manhunt for Laundrie ensued, continuing into October. Petito’s family has repeatedly called for Laundrie to turn himself in, as has Laundrie’s sister. TV personality Dog the Bounty Hunter even announced he was joining the search. People all over the country claimed to have seen Laundrie. One man who resembled Laundrie created a TikTok account for the sole purpose of explaining that he isn’t Laundrie. Another lookalike hiking the Appalachian Trail was awakened by U.S. Marshals bursting in the door of the lodge where he was staying. He chose a trail name for himself, “Not Brian,” according the New Yorker.

The first week of October, Laundrie’s sister, Cassandra, spoke on Good Morning America, urging her parents to cooperate with authorities. “I don’t know if my parents are involved,” she said. “I think if they are, then they should come clean.” She also called on Laundrie to turn himself in. Bertolino said in a statement that “the parents have been cooperating since the search began.”

Later that same week, news crews observed increased activity by authorities searching the Carlton Reserve near Laundrie’s parents’ home. On Wednesday, October 6th, Bertolino said in a statement that the North Port police had asked Christopher to participate in search efforts and he had accepted. Bertolino also said that Christopher had searched the reserve himself on the night of September 13th after his son failed to return from a hike there, changing the timeline of when Laundrie was last seen. (His parents had initially told authorities he’d been missing since Tuesday, September 14th.) The next day, WFLA tracked Laundrie’s father from the ground and the air as he joined authorities searching parts of the nature reserve for around three and a half hours. Christopher’s presence at the nature reserve marked the first time Laundrie’s parents had publicly participated in the search.

Afterwards, Bertolino said that Christoper had shown authorities some of Laundrie’s favorite trails. “There were no discoveries but the effort was helpful to all,” he said, adding that water in the Carlton Reserve was receding, making more areas accessible to searchers. “The entire Laundrie family is grateful for the hard work of the dedicated members of law enforcement that have been searching the [reserve] for Brian over the last few weeks. Hopefully Brian will be located soon.”

Petito’s disappearance captured the attention of the online true crime community. Web sleuths on TikTok shared constant updates about the search, picking apart Instagram captions for clues, sharing alleged sightings of the couple, and speculating about what could have happened.

Police body camera footage circulated on social platforms and in the news from an August 12th encounter with cops in Moab Utah. The video showed Petito sobbing in the back of a squad car and telling police she’d slapped Laundrie in an argument because he wouldn’t let her back inside the van. Cops separated them for the night. No charges were filed.

Weeks later, after Petito’s remains were found, an extended version of the video revealed the officer asking Petito about bruises on her arms and face and asking if Laundrie had hit her. She said Laundrie had hurt her when he grabbed her face, but took the blame saying she’d hit him first.

The case led to discussions of the warning signs of domestic violence, and brought attention to the risk of abusive relationships escalating in the isolation of the #vanlife lifestyle.

The media frenzy has also prompted reflection on so-called missing white woman syndrome and the attention paid to missing persons cases when the people who go missing are black, indigenous, or people of color. At a recent press conference, Petito’s father called on reporters and social media users to give the same attention to all missing people that they’d given his daughter. Petito’s family also announced a foundation in her name to fund organizations that help in cases of missing persons as well as organizations that aid domestic violence victims.

The discovery of Laundrie’s remains complicates the search for answers and justice in the case of Petito’s murder. Laundrie was the only named person of interest in her death.