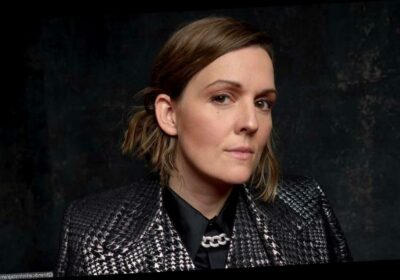 In a new memoir titled ‘Broken Horses’, the ‘Party of One’ singer explains why she thought that sedating herself with drug was ‘normal’ during the success of her ‘By the Way, I Forgive You’ album.

AceShowbiz –Brandi Carlile has gone candid about her past experience of coming close to an accidental overdose. In her new memoir titled “Broken Horses”, the “Party of One” hitmaker spilled details about her past struggle with steroids and sleep aids abuse which led to the scary moment.

Opening up about the incident, the 39-year-old singer noted that during the success of her 2018 album “By the Way, I Forgive You”, she would often took the drugs to deal with rigorous touring schedule and recurring cysts on her vocal cords. One time in April that year, she was alone in a New York City hotel room when she took different pills than the ones she was prescribed.

“I suddenly realized with a shot of adrenaline and shame that I was staring down at six Xanax that I was about to pop into my mouth and go back to sleep,” the Grammy-winning singer recalled in her book. “I don’t know if I would have ever woken up.” She then imagined “the stain” the “simple accident” would have left on her name.

Carlile said further that “no amount of defense” from her nearly 9-year-old wife, Catherine Shepherd, or her bandmates, Phil and Tim Hanseroth, would have been able to remove the stain. Noting that she was “just a tired mom alone in a hotel room afraid to let anyone down,” she learned her lesson. “I will always think about that before I pass judgment on a person who’s had a drug overdose,” she added.

When promoting the book, Carlile admitted to PEOPLE that she “had a problem.” She explained, “I thought that sedating myself was normal. The way I traveled and the way I navigated this country was with the help of a lot of sleep aids. All my friends were doing that to sleep on tour buses and on planes so they could get up and go to the radio stations. No one told me that it wasn’t normal or that accidents can happen.”

Carlile’s 2018 incident prompted her to seek treatment. These days, she claimed to be in a “better headspace” thanks to her counselor, her wife and her daughters, 6-year-old Evangeline and 3-year-old Elijah. She added that she will also “cancel things” instead of taking steroids, playing shows and harming her vocal cords.