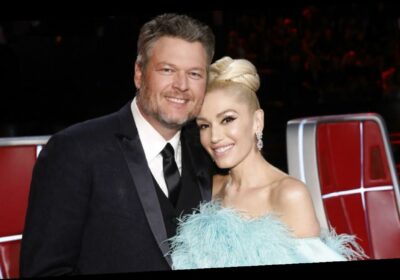 Blake Shelton says he takes his role as a stepfather to fiancée Gwen Stefani’s three boys very seriously, but is also having a lot of fun with it!

In a new radio interview for KFROG’s The Ride with Kimo & Heather, the 44-year-old country star admits that “there’s definitely nothing easy about it,” but it’s a job he loves. Stefani shares three children — Kingston, 14, Zuma, 12, and Apollo, 6 — with ex-husband Gavin Rossdale.

“I don’t know if it’s as hard, or harder, as being an actual, biological parent, you know?” Shelton said. “I have a stepfather in my life who’s one of my heroes. I love my stepfather and I look up to him and he’s like a father to me, so I have a good inspiration in my life for how to do this and the kind of stepdad I want to be.”

“I take it very serious. But I also have a blast with it, I’m not gonna lie,” he continues. “I don’t take it so serious that I’m not enjoying this time because I really am, especially now that we’re five years into this thing. I can’t imagine my life without these kids now.”

Stefani expressed similar sentiments about her love for Shelton during her virtual guest appearance on Today last month. The two first dating five years ago following their respective divorces from Rossdale and Miranda Lambert, and got engaged last October.

“My heart is racing. What don’t I love about Blake? And what don’t we all love about Blake?” Stefani gushed. “He’s just such a good guy. He’s one of the most generous human beings and down to earth. It all sounds generic but it’s just so true.”

“He’s so gifted, and so unique and talented,” she continued. “He really just is my best friend. I feel so excited that I have someone in my life that now I have a chance at happiness. For a long time to come. It’s just a blessing, the whole thing. It’s a miracle.”

Stefani also opened up about how “weird” it is that things just happen to fall into place so perfectly sometimes.

“You just don’t see things that are right around the corner after such, like, devastation,” she said, adding that there was “a lot to consider” when deciding whether they wanted to get married again. “There’s so many people involved. [My] children and their hearts, everybody in my family, his family, we all went through a lot together.”

“I think in a romantic way when you fall in love, like so hard and so unexpectedly and so late in your life, you’re like, ‘I want to marry you, now!'” she continued. “That’s the first romantic reaction, like, ‘Let’s get married.'”