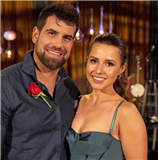 So much for an amicable breakup.

Blake Moynes no longer has anything positive to say about Katie Thurston.

As you likely recall, Moynes won Katie Thurston’s season of The Bachelorette this summer, concluding his run by getting down on one knee and proposing.

Thurston said yes… but then the couple split a short time later.

Not exactly shocking, considering how few couples who meet on The Bachelor or The Bachelorette actually make it to the altar.

Earlier this week, however, we learned that Thurston had moved on — with yet another suitor from her season.

She is now dating John Hershey.

How does Moynes feel about his ex finding a new lover so soon?

“I really don’t think there was any physical cheating there, but there [was] clearly emotional [cheating] for it to transition as quickly as it did,” Moynes said Wednesday on the Talking It Out With Bachelor Nation podcast, adding:

“I feel stupid and foolish for allowing it to happen, to some degree.”

We get it. We can’t really blame the guy for feeling this way.

Moynes only just found out about Thurston and Hershey a few days ago, just like the rest of us.

“I don’t know if it was partially me, too, like, was she emotionally cheating to some degree because I wasn’t able to provide something with words of affirmation, which I know I struggle with sometimes,” he added on the podcast.

“I try to stand by having no regrets.

“But it is instances like this where you really start to fight yourself with having no regrets just with the way things played out.”

Thurston herself hinted at her new romance when she dedicated Taylor Swift‘s “Begin Again” to Hersey on the final day of her “12 Days of Messy” challenge this past Tuesday.

The post featured a montage of sweet moments between the former Bachelorette and Hersey, who Thurston originally sent home during week two of her journey.

Page Six has since confirmed the romance.

“I know they spent a lot of time together and stuff but there’s just no way. I never had an inkling,” Moynes said on airr.

“I am just a very secure guy and I give my trust out 100 percent, especially to the person who I should be trusting the most.”

On October 25, Moynes and Thurston announced their split, saying in a statement:

It is with mutual love and respect that we have decided to go our separate ways.

We are so grateful for the moments we shared together and the entire journey that has unfolded this year, but we ultimately have concluded that we are not compatible as life partners, and it is the most caring choice for both of us to move forward independently.

We ask for kindness and privacy as we both navigate this transition. Both of us will forever want the best for one another and ask you to please support us in our decision.

Moynes, meanwhile, is a tad bit bitter over how this all has played out.

I just thought that she might at least tell me on the side just because we have had very cordial and easy conversations through text [since the breakup].

“Why not reach out to me and tell me that?” he said on the podcast.

“There’s a little lack of respect there. The way that she’s handled things, I am not overly surprised.”