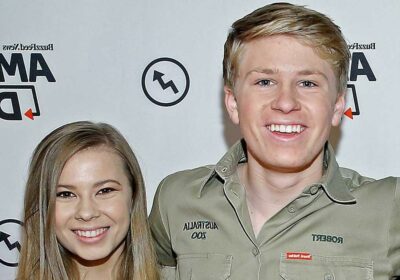 Bindi and Robert Irwin are celebrating their parents’ love! The siblings each took to social media on Friday to mark what would’ve been Terri and Steve Irwin’s 29th wedding anniversary.

In honor of the day, Bindi, 22, shared a sweet pic of Terri and Steve smiling in matching khakis as they posed with a reptile.

“Soulmates,” Bindi wrote alongside the shot. “Happy Anniversary to my sweetheart parents. Your love is the stuff of miracles.”

“Today marks 29 years since I married your dad,” Terri wrote. “He was a lot of amazing things, but most of all he was fun. Really, truly fun!”

Thank you @BindiIrwin. Today marks 29 years since I married your dad. He was a lot of amazing things, but most of all he was fun. Really, truly fun! https://t.co/MagBmDFkEB

Meanwhile, 17-year-old Robert celebrated his parents’ union with a silly photo of them. In the pic, Steve is smiling as he sits in a wheelbarrow with crutches, while Terri happily pushes her injured husband.

“Happy anniversary, Mum and Dad,” Robert wrote. “This is my favourite photo ever.”

The Irwins have often spoken about the challenge of celebrating big moments and milestones without Steve. This was most recently seen with the arrival of Bindi and husband Chandler Powell’s daughter, Grace, in March.

“He would’ve been a good, good grandpa. Yeah, he really would’ve been,” Bindi told ET in February. “I don’t think we would’ve ever seen our daughter. He would’ve just whisked her away into the zoo and it would’ve been perfect. But it is so nice that we’ll be able to introduce her to her grandfather through all of the documentaries. It’s really special.”

Terri noted that her late husband would’ve been “over the moon” about becoming a grandpa, and sentiment that Robert agreed with.

“I think it’s really special that as a family we get to remember him, honor him in absolutely everything that we do,” Robert said. “And make sure that that legacy never, ever dies no matter what. And now with a new little wildlife warrior taking on the charge, he would just be insanely excited. I can’t even imagine. It’d be amazing!”

Watch the video below for more on the Irwins.