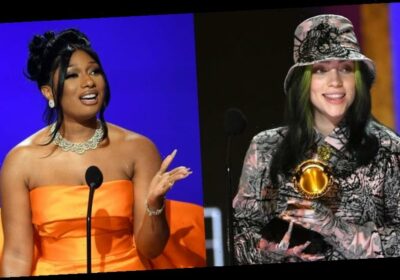 Billie Eilish won the biggest award of the night at the 2021 Grammy Awards, but she pulled an Adele and dedicated it to another nominee instead.

The 19-year-old singer took home Record of the Year for “Everything I Wanted” at the event on Sunday night (March 14) in Los Angeles.

Billie said that she was “embarrassed” when she got up on stage to accept the award, alongside her brother and collaborator Finneas, and then said Megan Thee Stallion should have won the award for “Savage.”

You might remember that when Adele won Album of the Year for 25, she said on stage that Beyonce should have won for Lemonade.

Billie said on stage to Megan, “You deserved this. You had a year that I think is unstoppable. You are a queen. I want to cry thinking about how much I love you. You are so beautiful. You are so talented. You deserve everything in the world. I think about you constantly. I root for you always. You deserve it, honestly. Genuinely, this goes to her. Can we just cheer for Megan Thee Stallion?”

After praising Megan, she added, “I really do appreciate this. Thank you to the Academy.”

The award was presented by Ringo Starr and you can see photos of him in the gallery.

Make sure to check out the FULL LIST of winners from the show!