Bill Cosby Speaks Out Following His Release From Prison 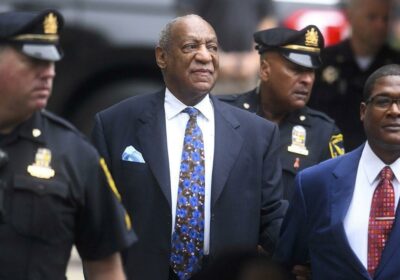 Bill Cosby is speaking out. The actor shared a statement to Twitter on Wednesday, just hours after his sexual assault conviction was overturned and he was released from prison.

“I have never changed my stance nor my story,” Cosby wrote, alongside a photo of himself holding up his fist, seemingly in a display of triumph. “I have always maintained my innocence.”

“Thank you to all my fans, supporters and friends who stood by me through this ordeal,” his message continued. “Special thanks to the Pennsylvania Supreme Court for upholding the rule of law. #BillCosby”

Earlier on Wednesday, Cosby’s 2018 conviction for drugging and sexually assaulting Andrea Constand was overturned by the Pennsylvania Supreme Court, and the 83-year-old actor and comedian was released from the State Correctional Institution Phoenix in Montgomery County, Pennsylvania.

I have never changed my stance nor my story. I have always maintained my innocence.
Thank you to all my fans, supporters and friends who stood by me through this ordeal. Special thanks to the Pennsylvania Supreme Court for upholding the rule of law. #BillCosbypic.twitter.com/bxELvJWDe5

In their decision, the court found that an agreement Cosby had with a previous prosecutor prevented him from being charged in the case, according to documents obtained by ET. Cosby previously said that he relied on that agreement before agreeing to testify in his accuser’s civil lawsuit.

The court also ruled that Cosby’s case cannot be prosecuted again, writing, “He must be discharged, and any future prosecution on these particular charges must be barred.”

Cosby was initially charged in the case in 2015. He was acquitted during his first trial in 2017. The next year, during Cosby’s retrial, he was convicted of all three felony sex-assault counts.

Prior to his conviction being overturned, Cosby, who has maintained that his encounter with Constand was consensual, had served more than two years of his three to 10 year prison sentence.

Cosby also held a press conference on Wednesday afternoon, though he did not speak. His attorney, Brian Perry, said, “We’ve said from day one, we just didn’t think he was treated fairly. And that…the system has to be fair, and fortunately the Supreme Court agreed with us. He’s happy, his wife is happy. The system only works if it’s fair to all sides. That’s the bottom line.”

Following Cosby’s release, Montgomery County District Attorney Kevin R. Steele, who oversaw the comedian’s prosecution, said in a statement, “The majority decision by the Pennsylvania Supreme Court orders the release of William H. Cosby Jr. from state prison. He was found guilty by a jury and now goes free on a procedural issue that is irrelevant to the facts of the crime.”

“I want to commend Cosby’s victim Andrea Constand for her bravery in coming forward and remaining steadfast throughout this long ordeal, as well as all of the other women who have shared similar experiences,” Steele’s statement continued. “My hope is that this decision will not dampen the reporting of sexual assaults by victims. Prosecutors in my office will continue to follow the evidence wherever and to whomever it leads. We still believe that no one is above the law—including those who are rich, famous and powerful.”

For more, see the video below.