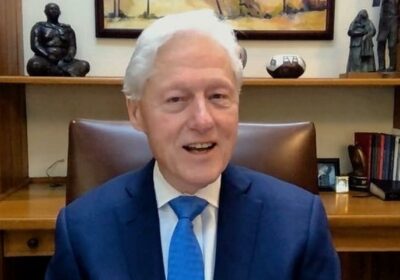 The former President of the United States has returned home in New York after being discharged from a hospital in California following a battle with sepsis.

AceShowbiz –Bill Clinton has been discharged from the hospital after battling sepsis.

The 75-year-old former U.S. president was admitted to UCI Medical Center in Irvine, California, on Tuesday (12Oct21), after a urological infection developed into sepsis, and he continues to be treated with antibiotics.

Clinton was visited by his wife Hillary, and their daughter Chelsea on Saturday, and remains in “good spirits.”

His spokesperson, Angel Urena, tweeted, “He is in great spirits and has been spending time with family, catching up with friends, and watching college football. He is deeply grateful for the excellent care he continues to receive and thankful to the many well-wishers who have sent kind words to him and his family.”

Bill’s physician Dr. Alpesh Amin confirmed the former U.S. leader was heading home on Sunday (17Oct21), stating, “His fever and white blood cell count are normalized and he will return home to New York to finish his course of antibiotics.”

Bill previously underwent quadruple bypass surgery, and in 2010 he had a pair of stents inserted into an artery.

Before hospitalization, Clinton was reportedly in California for a private event for his foundation when he was feeling fatigue on Tuesday.

“He was admitted to the hospital for close monitoring and administered IV antibiotics and fluids,” said the doctors treating him at the hospital.

“After two days of treatment, his white blood cell count is trending down and he is responding to antibiotics well,” the doctors continued to explain. “The California-based medical team has been in constant communication with the President’s New York-based medical team, including his cardiologist.