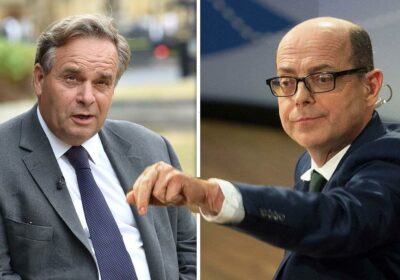 Nick Robinson, 58, has hit out at politicians who become embroiled in controversies, stating that they are becoming “harder to defend”. The Today show host made the comments in the wake of Neil Parish’s resignation after he was caught watching pornography in the House of Commons.

“And it will continue to be until and unless more MPs make a stand for high standards in public life.”

Nick added that he always accepted that “any group of 650 men and women egotistical enough to put themselves in the spotlight is bound to contain its fair share of liars, chancers and crooks”.

However, he highlighted that a huge change in recent years has been that “MPs have responded to scandals by seeking to defend their own or damage their enemies”.

Instead, Nick professed that Mr Parish should have owned up straight away.

Mr Parish resigned as MP for Tiverton and Honiton after two female colleagues saw him watching adult content in Parliament.

Before he was named as the Tory in question, Mr Parish appeared on GB News and said the anonymous MP should be “dealt with seriously” and expressed his trust that a “thorough investigation” would take place.

Two days later, Mr Parish was named as the culprit and he was suspended by the Conservative Party.

Nevertheless, he admits that the second occasion was deliberate.

He told BBC South West: “The situation was that funnily enough, it was tractors I was looking at.

“I did get into another website that had a very similar name and I watched it for a bit, which I shouldn’t have done.

“But my biggest crime is that on another occasion I went in a second time.”

Last week, Nick clashed with George Eustice when the topic of Mr Parish was discussed.

On the Today programme, Nick asked the Environment Secretary about his own farming background.

Mr Eustice firmly said, “No”, before adding: “Look, Neil Parish, somebody I know and respect, has given an account and he’s resigned his seat for what happened.

“Clearly it was a big error of judgement what he did, and I think he’s given an account of that.”

Nick then fired back: “Do you not think that some of the things that are now being said to excuse and defend behaviour that in any other walk of life would persuade people to resign?