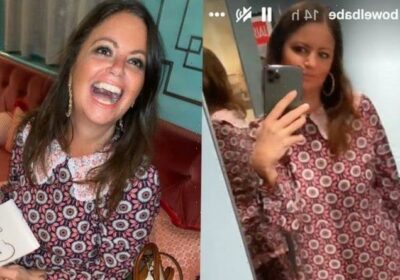 Deborah James has celebrated turning 40 today after being told it was a day she “would not see” when diagnosed with stage 4 bowel cancer back in 2016. The BBC presenter posted a sweet snap on Instagram of her enjoying a birthday dessert while at the Beaverbrook Town House last night in Chelsea, London.

Deborah looked glamorous in a trendy collared dress with a floral print which she paired with dangly gold earrings.

Her brunette tresses were worn in a bouncy blow-dry as she completed the look with a smokey eye palette.

She typed: “It’s not quite my birthday! But last night I got my first ‘Happy Birthday’ (thanks to the @elizabetharden team), and my word it made me smile!

“I appreciate it’s weird to bang on about a birthday, but It’s a milestone (40) I was told I wouldn’t see.

“So forgive the next week of, ‘Omg, I might actually see my 40th’ over excitement on the posting front!”

In response, her celebrity friends and fans told her to “enjoy” every minute of the momentous occasion.

While influencer Katie Pix commented: “We’re all celebrating with you! Milk it girl.”

Deborah was diagnosed with incurable bowel cancer back in 2016 and has continued to undergo treatment.

During this time, she has described her husband and father of her two children, Hugo, 13, and Eloise, 11, as being her “rock”.

Before her diagnosis, she was an ambitious deputy headteacher who’d been brought in to turn around a failing comprehensive in Surrey.

It meant she and her banker spouse were usually stressed and barely saw each other.

“It was a classic case of our marriage coming last,” she said.

Sebastien moved out in 2015 and they embarked on an initially “acrimonious” divorce, both hiring lawyers and starting to see other people.

They’d already had the decree nisi when they agreed to counselling, not with any hope of a reconciliation, but to be on more cordial terms for the children.

Then, to Deborah’s astonishment, the pair began having drinks, then dinner, after the sessions.

In November 2016, they made “a big step” and got back together, only for Deborah to receive her shock diagnosis soon after.

“No one thought 35-year-old vegetarian runners got bowel cancer,” she told Daily Mail.

“Everyone assumed it was something that old, meat-eating men got.”

Deborah is currently undergoing chemotherapy once again, after having a stent fitted to ensure she is able to have the treatment.