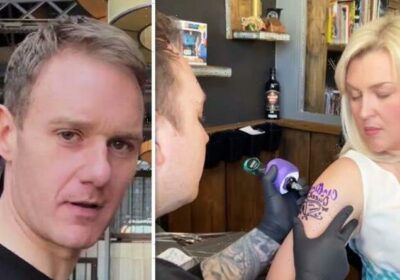 BBC Breakfast presenter Dan Walker was not falling for Sara Davies’ April Fool’s Day prank yesterday and took to Instagram to call her out when she claimed to have got a tattoo. The Strictly Come Dancing star, 37, shared a snap of herself on Friday sporting a giant design on the top of her arm, but it wasn’t long before the BBC host, 45, took to the comments to challenge her over the timing of her new inking.

Sara even added a photo of the artist holding a tattoo gun to her arm so it looked like she had really gone through with the design.

In an attempt to convince her 213,000 followers, the Dragon’s Den star captioned the post: “Look what I’ve treated myself to!

“I’ve been fancying getting a tattoo for a while now but didn’t know what to get or who to go to for it, then I found out @gentlemanjimstattooclub is just down the road from our office.

“He’s such an amazing artist so he designed this Crafting Queen piece personal to me and I absolutely love it!”

The enormous purple inking was supposed to be a nod to Sara’s business, Crafter’s Companion.

Despite being very persuasive, Sara couldn’t fool her fellow Strictly contestant Dan and he took to the comments to challenge her.

He shared a laughing emoji and teased: “What day is it again?” As he remembered it was indeed April Fool’s Day.

Nevertheless, some of Sara’s friends did seem to fall for the trick.

Eventually, Sara put her followers out of their misery and confirmed that the tattoo was fake.

She said: “Can’t believe so many of you fell for my ‘tattoo’ … APRIL FOOLS!

“I had SUCH a laugh planning this and I just want to say a huge thank you to the Crafters Companion team including @cupofcaitlinn for filming and pics and @darrengbrown for designing my crafty tattoo.

“And last but least Jamie at @gentlemanjimstattooclub for lending us his (real) tattoo studio and getting in on the prank!”

More than 300 of Sara’s followers took to the comments to share their relief.

Amanda said: “Oh thank goodness!!! I really didn’t like it and didn’t want to say!!! Haha!”

Marion added: “Phew…. I love you… hated the tattoo. Thank goodness it was a joke.”

And @theblackcakelady laughed: “Very, very good!! You definitely had us all fooled!”