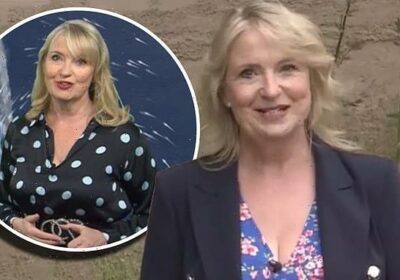 ‘I don’t want to go, but one day it’s going to happen’: BBC Breakfast’s Carol Kirkwood, 60, predicts she’ll be axed from the show in the next decade

BBC Breakfast’s Carol Kirkwood has revealed it is unlikely she will still be on the show in 10 years time.

The weatherwoman, 60, who has hosted the weather on the morning show since 1997, admitted she doesn’t want to leave and hopes it happens ‘naturally’ – but predicts she won’t be there when she hits the age of 70.

She told the Western Mail: ‘I try not to worry about things I can’t change. I don’t want to go, but one day it’s going to happen.’ 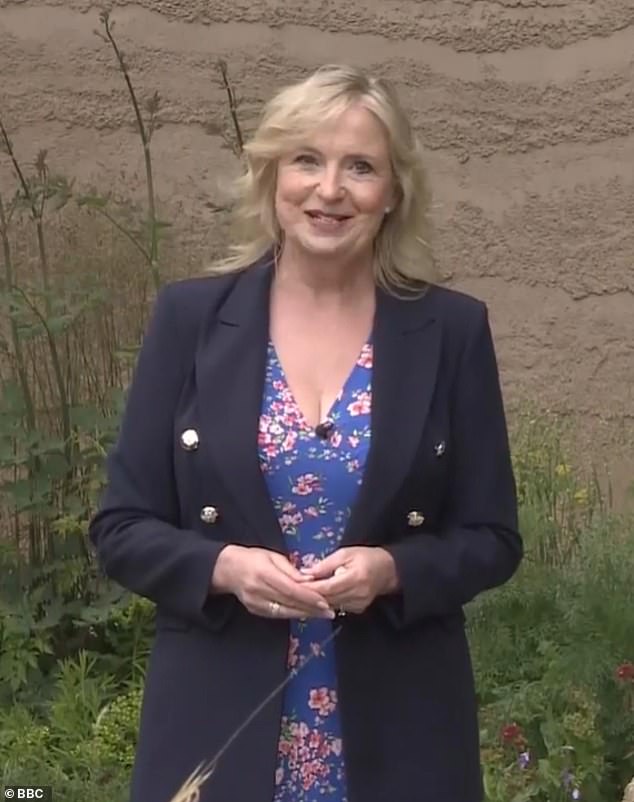 Career: BBC Breakfast’s Carol Kirkwood has revealed it is unlikely she will still be on the show in 10 years time, predicting it’s ‘unlikely’ she’ll still be there when she turns 70

Carol continued: ‘Hopefully it will be naturally but I also have to acknowledge I’m 60 and am unlikely to be at the BBC when I’m 70, I would have thought.

‘It’s the natural course of events… I don’t want to be using a stairlift to get to the studio in the morning. But I love my job.’

Carol announced on live TV in May that she is engaged to her fiance, who is known only as Steve.

Speaking about the engagement during the interview, she said: ‘We’re not galloping towards it. It’s nice, because the first time I got married, I was young, so you’re involved in the wedding almost from the time you get engaged. 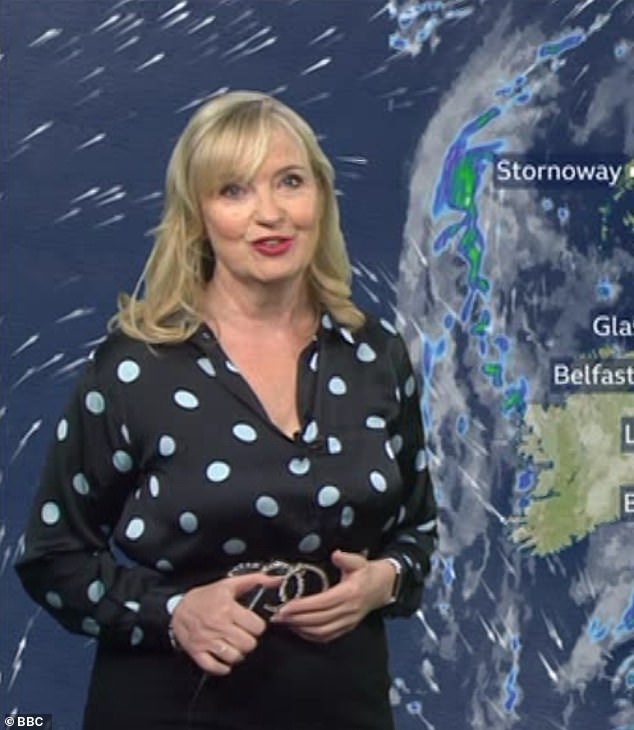 Opening up: The weatherwoman admitted she doesn’t want to leave and hopes it happens ‘naturally’ – but predicts she won’t be there when she hits the age of 70 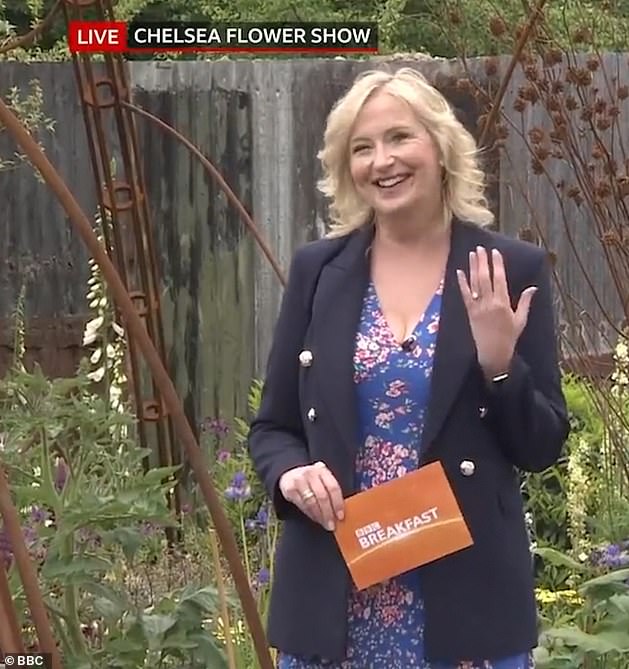 Congrats! It comes after Carol announced that she is engaged live on air as she flashed her bling new engagement ring

She revealed they are going at their own pace and expressed how happy she is with her relationship, describing Steve is ‘funny, kind, caring and romantic’.

Carol, who was married to property developer Jimmy Kirkwood for 18 years until they divorced in 2008, is believed to have met Steve around five years ago.

Announcing her new engagement, she waved he engagement ring and told BBC Breakfast hosts Sally Nugent and Jon Kay they are ‘thrilled’ to getting married – and revealed her partner proposed during a picnic.

‘We got engaged when we were on holiday so it’s lovely news and we’re both thrilled,’ Carol said, adding: ‘We went out for a picnic, I had no idea’. 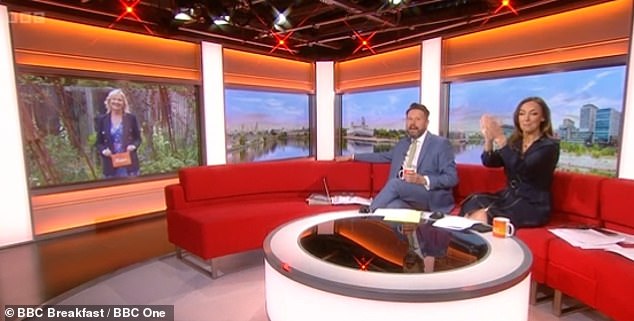 Excitement: Presenters Sally Nugent and Jon Kay seemed thrilled with the good news as they clapped in the studio

She went on: ‘The weather was glorious. We were sitting, chatting, my other half was a wee bit nervous for some reason that I didn’t know, he was fumbling in his pocket and out came a ring. I thought he was joking actually, I didn’t believe him to start with but it was lovely – it was quite romantic.’

Carol has previously said she and her partner have both agreed to keep their relationship private, but gushed that he is the ‘best thing that’s ever happened to me’.

Carol previously spoke about her divorce in an interview with the Radio Times: ‘I found myself when I got divorced. I started to do things and to think, ‘I’m not going to say no, I’m going to say yes.

Following her divorce, Carol went on to star in Strictly Come Dancing in 2015 with her dance partner Pasha Kovalev, and spoke about her love life after the demise of her marriage.

‘I was married for a long time, and I got married quite young, so it’s nice doing things I have the freedom to do now, if I want to go out to the theatre or go out with friends for dinner, I’ve got that freedom.’

A year after starring on the show, Carol said she was seeing someone, stating: ‘I’m very happy in my relationship status at the moment. I’m not single. I’d just started seeing somebody, so it was ok, it didn’t matter.’ 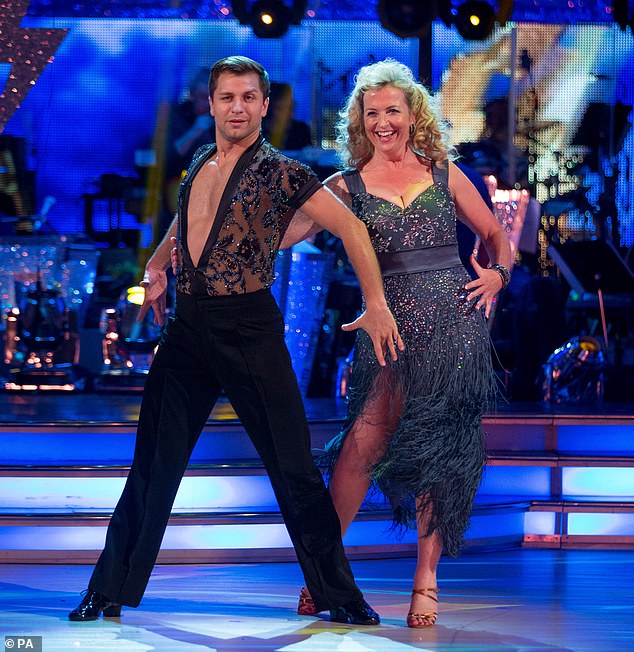 ‘I’m braver now’: Following her divorce, Carol went on to star in Strictly Come Dancing in 2015 (pictured with Pasha Kovalev), and spoke about her love life after the demise of her marriage saying she would never have said yes to it when she was married