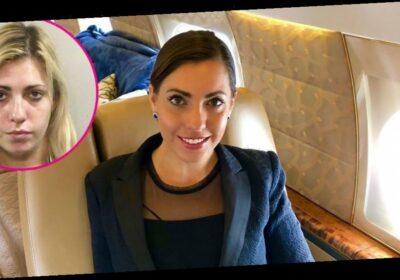 Another Queen! Meet the 5 New Women Entering ‘The Bachelor’

“Every saint has a past & every sinner has a future. John 8: 7,” the reality star, 28, captioned a Friday, January 22, Instagram photo, which showed her posing at the beach in a white cardigan.

Us Weekly confirmed that Larson was arrested in Tallahassee, Florida, in July 2012 for stealing more than $250 worth of merchandise from a Publix grocery store. According to the arrest report, she placed several items in a shopping cart that she took to the checkout section of the store but then put the products, including food and cosmetics, in a reusable shopping bag.

The TV personality exited the store with the stolen objects but was brought back inside and detained until police arrived. She initially denied the theft allegations but ultimately gave a written statement to a police officer.

Everything Matt James Has Said About His ‘Bachelor’ Journey

The Sun reported that she received six months of probation after accepting a plea deal in August 2012. She was also required to pay hundreds in fees and attend theft awareness classes.

Larson’s mugshot shows her with blonde hair instead of the brown hue she sports on Matt James’ season of The Bachelor, which premiered on January 4. She has already clashed with several women in the house since introducing herself as “Queen Victoria” during the first episode.

The California native was among those who lashed out at fellow contestant Sarah Trott during the Monday, January 18, episode of The Bachelor. The former broadcast journalist, 24, quit the show amid issues with her castmates and looming fears about her father’s deteriorating health. After her departure, Trott seemingly took a jab at Larson via Instagram with a quote that read, “Real queens fix each other’s crowns.”

“We see the quote ‘women supporting women’ all the time on the internet but what does that really mean? To me, it means sharing encouragement instead of judgment,” Trott wrote. “Refraining from negative comments even when it’s sometimes easier to say something mean instead of something nice. It means supporting a female-owned business and paying full price. It means supporting a younger woman in your industry and offering guidance and support when appropriate. It means valuing community over competition. It does NOT mean you have to pretend to like everyone always. That’s impossible.”

However, Trott noted that sympathy for others goes a long way. “But it DOES mean being a good person, keeping your head up and refraining from degrading another human being. You never know the internal battles another person is going through,” she concluded. “At the end of the day, please just be a decent, kind individual.”