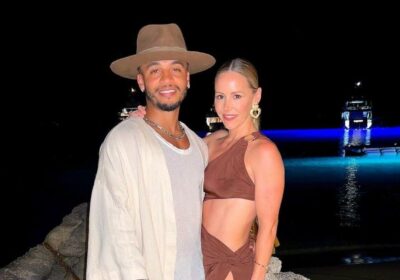 The JLS member is officially taken off the market as he has exchanged wedding vows with Sarah Louise Richards, the mother of his two children, following five years of engagement.

AceShowbiz –Aston Merrygold has tied the knot with Sarah Louise Richards. After a five-year engagement, the 34-year-old pop star has revealed via Instagram that he’s finally tied the knot.

“Husband and Wife [heart and cloud-nine emojis] (sic),” Aston – who has Grayson, four, and Macaulay, two, with Sarah – wrote on the photo-sharing platform alongside an image of her hand on top of his.

The loved-up couple got engaged on Christmas Day in 2017 after Sarah met Aston while she was working as a back-up dancer for JLS. Aston and Sarah had initially planned to tie the knot much sooner, but their plans were derailed by the COVID-19 pandemic.

And after announcing the news of their marriage, Aston was quickly inundated with congratulatory messages from some of his showbiz pals. JB Gill – Aston’s JLS bandmate – wrote on Instagram, “[heart emojis] Beaaaaaaautiful! Love this news and HERE for the floating!! [heart emojis] welcome to the club Team Merrygold [heart emojis] (sic).”

Kimberley Walsh – who was a member of Girls Aloud – also offered her congratulations to the newly-married couple. The 40-year-old star said, “Ahhhhh congratulations [stars and hearts emojis] (sic).”

Meanwhile, Aston previously revealed that Sarah had taken charge of their wedding plans. The “Love You More” hitmaker also insisted that they wanted to get married “properly” and that they were prepared to wait for the pandemic to ease.

Speaking about their wedding plans, Aston explained, “If I’d had it my way I’d be ‘let’s do it, registry office, go somewhere, get it done.’ She was like ‘no, we’re holding out. We’re doing this properly.’ “