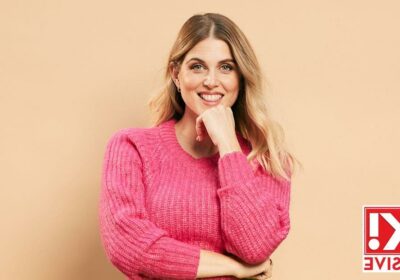 Ashley James was over the moon when she welcomed her son Alfie 10 months ago with her boyfriend Tom Andrews, and the family of three just enjoyed a sun-soaked getaway on his first family holiday.

But after becoming a new mum, the radio presenter found people "celebrating" her weight loss shortly after she and Alfie contracted Covid-19, which saw her newborn being taken to hospital.

Speaking exclusively to OK!, Ashley, 34, began to explain whether she has experienced feeling a "pressure" to snap back into shape after giving birth.

"I wouldn’t say from anyone in particular, but it does upset me that it seems to be the narrative around postnatal bodies," she said. "I had Covid-19 around a month ago and I lost weight as I was so ill.

"Alf was also ill and he ended up in hospital so that was obviously stressful and I wasn’t sleeping."

She added: "I was continuing to breastfeed while being ill which was a challenge, and people celebrated my weight loss as if it was an achievement.

"Sexiness and beauty is not one shape or size and it’s not about being the smallest version of yourself so you can be celebrated."

Opening up on the scary time little Alfie was in hospital, Ashley revealed: "It’s scary when you go through something like that with a child.

If I could’ve made my baby feel better and take his symptoms I would have."

The star then discussed how she has been settling into life as a new mum, with her telling us she "loved" the newborn stage.

"Different stages have been equally amazing and challenging. I loved the newborn stage and I thought it was the best thing, but I found it really difficult around four to seven months," she continued.

"That’s when being a new mum and having a newborn wears off and people forget to check in.

"In the newborn stage you can get away with not showering and watching a boxset with your boobs out being milked."

For all your updates on Ashley James, her work commitments and romantic life, sign up to our daily OK! newsletter.

Ashley adds: "You get to a point where you’re like, 'Oh my God, I should shower now,' but Alf is awake and he wants to play so you can’t do anything.

"I also wanted to put time into work, dates and to see friends but I was still figuring out the juggle of how to make it work."

Tu Clothing baby, womenswear and maternity is all available to purchase online at Tu.co.uk and in selected Sainsbury’s stores. Ashley James’ A/W Edit is available to shop now