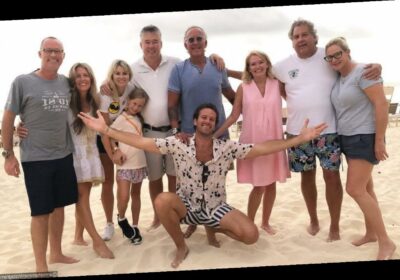 After spending months apart because of the ongoing coronavirus pandemic, the ‘Call Me By Your Name’ star is finally able to get together with his two children in the Cayman Islands.

AceShowbiz -Actor Armie Hammer has decided to no longer share photos of his children on social media after reuniting in the Cayman Islands following months apart.

The “Call Me By Your Name” star and his wife, Elizabeth Chambers, had originally escaped to the vacation destination with their two kids at the start of the coronavirus pandemic, and decided to stay put as the world shut down.

However, in July (20), Hammer and Chambers announced their plan to divorce after 10 years of marriage, and the actor subsequently returned to Los Angeles.

He hadn’t seen daughter Harper, six, and son Ford, three, in person since, but managed to return to the Cayman Islands in mid-December in preparation for the long-awaited get-together.

As per government restrictions, travellers to the Caribbean islands are required to quarantine for 14 days, and Hammer spent Christmas and New Year’s Eve in his beachfront hotel suite, but on Saturday, January 2, he was finally allowed to leave his room and was reunited with his children after undergoing one last coronavirus test.

He celebrated the end of quarantine by sharing a photo of himself beaming while joined by family members on the beach, and captioned it, “Free at last!”

Hammer also explained why Harper and Ford were not included in the image, “With my kids but as a New Years resolution I will not be posting pictures of my children for their safety and for their well-being (sic),” he shared.

He had previously counted down to the special day by uploading a shot of himself holding a drink as he looked out to the beach.

“Good things on the horizon,” he wrote. “5 days of quarantine left.”