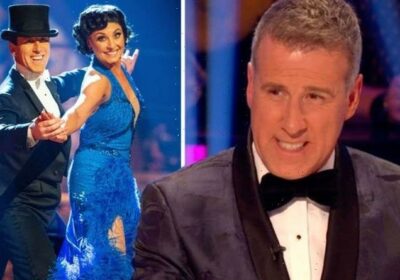 Strictly Come Dancing 2021 judge Anton Du Beke gave an insight into his experience as a professional dancer during last night’s live show. The 55-year-old ballroom dancer admitted that one dance in particular made him feel like he was having a “mid life crisis” while on the dance floor.

The BBC favourite made his comments following a performance by fellow pro Giovanni Pernice and EastEnders star Rose Ayling-Ellis.

The couple had just danced a salsa to Cuba by the Gibson Brothers.

Anton praised the pair for their energetic routine and went on to reveal that he felt “awkward” performing the Latin dance when he was a pro on the show.

The dancer took part in 18 series of Strictly and is the only professional to have been a part of the show since it first aired in 2004.

“I always felt like I was having a mid-life crisis when I was doing the salsa.

“I could never quite get the groove, as fabulous as I am, but you had it from the moment you started,” he continued.

“I like everything you do from the ankles up. The feet don’t work as strongly as I’d like them but the body is magnificent. Keep that up. I love it,” Anton gushed.

Giovanni and Rose were awarded 26 points in total for their routine, placing them in the middle of the leaderboard on week two of the competition.

Dragons’ Den star Sara Davies and her partner Aljaz Skorjanec are at the top of the table after finding themselves at the bottom following the first live show.

Fellow EastEnders star Nina Wadia and Neil Jones are at the bottom of the leaderboard this week with just 18 points.

Tonight viewers will see the first elimination of the 2021 series.

Two years ago, he danced with EastEnders actress Emma Barton and made it all the way to the final.

Unsurprisingly, his best scoring salsa was danced with Emma during their stint on the show.

They were awarded 27 points for their Austin Powers-inspired Movie Week routine to Soul Bossa Nova.

Anton received his lowest score – a measly 12 points – for a salsa with Ann.

After almost 17 years on the show, the father-of-two said he was “over the moon” to be taking up a seat on the judging panel.

Strictly Come Dancing continues on BBC One tonight at 7.05pm.