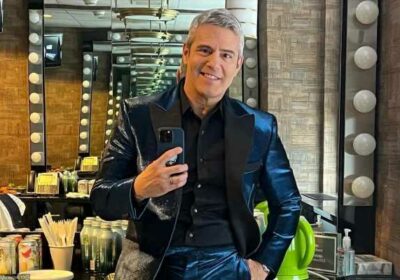 Having welcomed his two children via surrogate, the ‘Watch What Happens Live’ host admits parenthood always becomes the ‘third thing in the room’ when he started dating again.

AceShowbiz –Andy Cohen has found dating as a single dad to be “emotionally chaotic.” A father to 3-year-old Ben and 3-month-old Lucy, who were born via surrogate, the 54-year-old TV star explained that while he was always “meant to be” a father, he realized that parenthood always becomes the “third thing in the room” when he started dating again.

“The minute my daughter came home from the hospital and we were home that first night and I was like, ‘wow. This, two feels really like a family.’ And I was like, ‘Wow, this feels so good. Like, this is my family. This is what I was meant to be.’ And so I love, I’m just I’m so looking forward to what’s to come, but it’s, it’s really hard…,” he said.

Andy continued, “But it’s gotten in my mind more kind of emotionally chaotic because in my mind, you know, there was, there was a guy that I had been dating and I said to him, at one point ‘You, there’s kind of a third thing in the room here as we’re dating.’ And he said, ‘I know,’ he said, ‘Well, what do you think that is?’ I said, ‘It’s that I have a family.’ “

However, the “Watch What Happens Live” star, who split up from Broadway star John Hill in 2020 after three years of dating, went on to explain that his new date thought the problem was his celebrity status and is now thinking more about having to introduce any potential partners to his children.

Speaking on SiriusXM’s “Stern Show Summer School”, he added, “And he said, ‘Oh no, I view that third thing is that you’re famous.’ And I’m like wow. I don’t even think about that. I’m like, we’ve been out 15 times. How has being famous affected any of the times we’ve been out? Like, it’s been fine. So I thought that was interesting, but that’s taking up noise in my head, the dating thing, because I’m like, ‘Oh my God, I’m not only dating someone, but I’m dating someone obviously there’s gonna be a point where I’m like, I want you to meet my kids.’ “