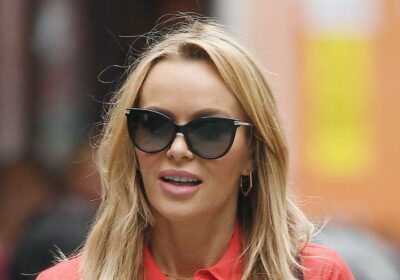 The Britain's Got Talent judge posted a pic of her sibling looking incredible in a bikini as she relaxed on a well-deserved holiday.

Amanda, 50, shared the stunning photograph of her 48-year-old sister coming out of the sea in with her 1.7 million Instagram followers.

Deborah looked incredible in a patterned bikini and sunglasses, and Amanda captioned the picture: "My sister @deblholden living her best life," ending with a heart emoji.

This isn't the first time Amanda has startled fans with a picture of her sister.

In 2018, she posted snaps of the pair at a Muse concert at the Royal Albert Hall in London. One follower commented: "Two gorgeous ladies, spitting image or what?!"

Amanda has always been close to her younger sister, and they both had a strained relationship with their father Frank when they were growing up.

Frank split from Amanda and Deborah’s mother Judith in 1976 due to his alcohol-fuelled behaviour.

Amanda has also spoken publicly about her sister on numerous occasions, including in 2015 when she was caught up in an earthquake aftershock while stranded on Mount Everest.

At the time, Amanda told Sky News: "I want to give her a massive hug, it’s one of those things where you think, What were you even doing?"

Amanda has said in the past that her sister is much more of an ‘outdoors type’ than her. She is very free-spirited and has travelled all over the world, before moving to Koh Lanta in Thailand where she works as a diving instructor.

Like her sister Debbie, Amanda is no stranger to looking sensational in swimwear.

At the weekend, she shared a picture of herself looking incredible in a green and white patterned swimsuit whilst by the pool on holiday.

She performed several fun poses as she jumped into the pool in a TikTok video, which she shared with her followers on her Instagram. The poses included Mary Poppins, a ballerina and standing on a tube.

Days earlier, she showcased her stunning figure in a bikini photograph by the pool. She also shared a pic of her gorgeous daughters, Alexa, 15, and Hollie, 9, with the caption: "My babies."

The night before, she was lucky enough to share a date night with her husband Chris Hughes.

The couple met in Los Angeles in 2003 and started dating the following year. They married on December 10, 2008, at St Margaret’s Church in Somerset, followed by a lavish reception at Babington House.