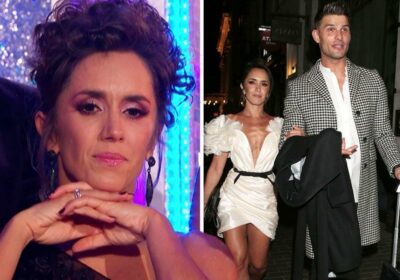 Strictly: Janette Manrara rules out a return to dancing on show

Former Strictly Come Dancing professional Janette Manrara has opened up about the moment she had torn her meniscus almost ending the dancer’s career. The It Takes Two host explained she was previously rushed to the hospital to undergo surgery in a new interview.

Janette, 38, who is married to fellow professional dancer Aljaz Skorjanec, 32, said that surgery for her knee injury had put the dancer’s career in doubt.

The Miami-born performer recalled the moment she was left in agony after tearing her meniscus – a form of cartilage damage.

Cartilage is a tough, flexible tissue found throughout the body and it covers the surface of joints, acting as a shock absorber and allowing bones to slide over one another, according to the NHS.

It can become damaged as a result of a sudden injury.

In 2011, as she toured the US with the live show Burn The Floor, Janette was injured and left in agony.

“I had a torn meniscus and needed surgery on my left knee,” she explained. “It was really scary because I kept dancing. The doctor had said, ‘You can actually dance on it for a few more shows, but it is risky’.

“It was so painful. I was taking ibuprofen all day, every day.”

Janette made it through to the end of the dance tour but arrived in Los Angeles, California for immediate surgery.

She went on: “They looked after me fantastically well but you know, my body is my tool. It’s how I make my living. So the day I came out of hospital was really scary. My knee and my whole leg were so swollen, I couldn’t walk on it or even put weight on it.

“There was this intense worry and fear, ‘Oh my god, am I ever going to be able to dance the same again?’”

The professional dancer underwent intense physiotherapy to aid in her recovery process.

She had been previously told she would require six weeks off from dancing following the keyhole surgery.

But much to her delight, Janette was able to begin dance training ahead of schedule.

The Latin dancer added to The Mirror: “As soon as the swelling went down and I was able to do my physical therapy, I thought, ‘Actually, I’m going to come out the other end of this better than I was going in’.

“I was back up in four weeks. I think it was the consistency of sticking to the exercises I needed to do that was so important.”

Elsewhere, the professional dancer stunned fans when the dancer announced she had quit Strictly in 2020 after seven years on the programme.

She has since joined the BBC’s sister show, It Takes Two, where she replaced show regular Zoe Ball.

Back in March, Janette’s other half Aljaz made the “tough decision” to also quit the dance show after nine years.

There has been no exact reason as to why he has decided to leave, but he hinted he will be working on some different projects.

Strictly Come Dancing returns to BBC One later this year.