‘Jeopardy’ fans are mourning the loss of longtime host Alex Trebek, who tragically lost his battle with pancreatic cancer. Here’s 5 things to know about him.

Jeopardy! host Alex Trebek has sadly lost his fight against stage 4 pancreatic cancer. He passed away on November 8, 2020 at 80 years old. The sad news comes less than two years after his diagnosis which he first revealed in a video announcement in March 2019. At the time, he admitted that the prognosis for his illness was “not very encouraging,” however said he planned “to fight this, and I’m going to keep working.” Despite his illness, Alex did not retire from the long running game show and continued to host. Here are 5 things to know about him. 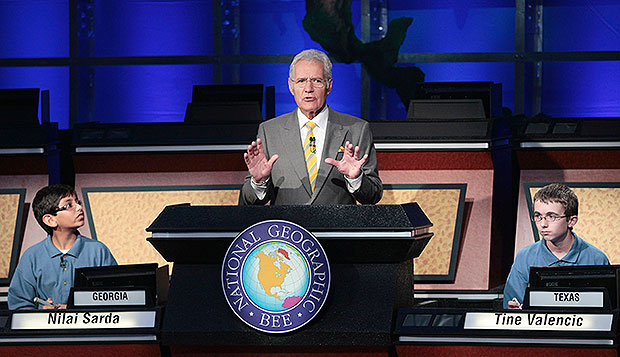 2. He’s got a laundry list of a resume. Trebek hosted other game shows including, The Wizard of Odds, Double Dare, High Rollers, Battlestars, Classic Concentration and To Tell the Truth. He’s been such a staple on television that he’s appeared in a number of tv shows as himself. Trebek has a total of five Outstanding Game Show Host Emmy Awards and a star on the Hollywood Walk of Fame. He also has a star on Canada’s Walk of Fam in Toronto.

4. He had endured other health issues before his brain surgery.  In December 2007, he suffered a minor heart attack, but returned to work as planned in January. Then, in July 2011, he tore his Achilles tendon while chasing a burglar from his hotel room in San Francisco. In June 2012, he suffered another mild heart attack, and again, returned to work the next month, as planned. Three years later, in 2015, Trebek had to host Jeopardy while seated due to a full knee replacement.

5. He previously opened up about retirement plans. “I mentioned to our producer not so long ago that the fellow that does play-by-play for the Los Angeles Kings — they should consider him,” Trebek said, referring to Alex Faust when asked about who would replace him. The second? — “There is an attorney, Laura Coates. She’s African-American and she appears on some of the cable news shows from time to time.”