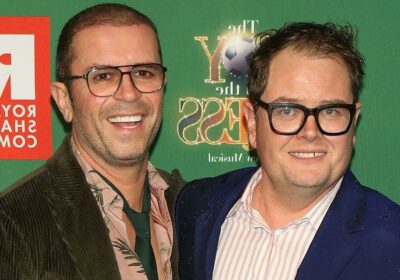 Alan Carr and his husband Paul Drayton have shared they've split after 13 years together.

A spokesperson for the 45 year old comedian and his husband, 46, broke the news in a statement through PA news agency, explaining their separating "amicably" after three years of marriage.

"After 13 years as a couple and three years of marriage, Alan Carr and Paul Drayton would like to announce they are separating," the statement read.

It continued: "They have jointly and amicably made the difficult decision to divorce and go their separate ways.

"We request that their privacy is respected at this sensitive time." Alan and Paul first got together over a decade ago and tied the knot in 2018, which his close pal Adele is said to have paid for.

At the time, a spokesperson shared their excitement over their wedding as they said: "Alan Carr married his long-term partner Paul Drayton at a small private ceremony in LA last week.

"The couple are currently on honeymoon in Mexico and are planning a big celebration with all their family and friends back in the UK later this summer. They are both extremely happy."

In August of 2021, Alan shared his support for Paul after the relapsed alcoholic shared a shocking photo of himself with a black eye.

Speaking to The Sun, the funnyman said: "While I was away filming on location the past few weeks, Paul fell off the wagon and started drinking again.

"When I arrived back home from Wales, Paul was covered in scratches and bruises from a drinking binge. "We are now working together to get the help he needs to get better which is our number one priority right now."

Speaking on Kelly Hoppen's podcast in 2020, Alan said: "It's been tough for Paul during lockdown.

"He's been so good and I'm so proud of him," the former Chatty Man host said.

He added: "I like eating and drinking, but it was ridiculous before – we were cracking open a bottle of rosé because it was a Monday.

"We were out of control. It was a laugh, but looking at Paul, sometimes the party has to stop."

For all your updates on Alan Carr and Paul Drayton, sign up to our daily OK! newsletter.