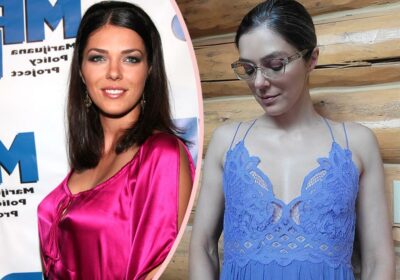 Last year we learned Adrianne Curry had left Hollywood and moved to Montana — and said goodbye permanently to one of her most defining physical features from her time here.

The first America’s Next Top Model winner revealed on her ever candid Instagram account last Spring how she’d chosen to get her breast implants removed in a difficult surgery back in January 2020. She mentioned that she’d “lost most my right breast” but did not go into detail about the time, as she mostly spoke about how much better she felt without her “Jessica Rabbit boobs.”

Now the former model is opening up about the implant horror story which led to her have an even smaller chest than when she started.

In an IG post from Sunday she tries hard to dissuade other women from going under the knife in the first place, writing:

“Accepting the fact that my poor decisions in Hollywood resulted in my losing most my natural breasts when I explanted…. was the biggest hurdle I’ve jumped. Severe body dysmorphia led me to implanting & modifying my body… I needed therapy..NOT plastic surgery…but I digress…”

She then explains what went wrong:

“I lost 95% of my right breast due to scar tissue & compromised flesh from leaking silicone (that doctors assured me was NOT leaking & I could leave it in for yrs!) that the doctor had to do a huge reduction on my left breast.”

The surgeon trying to fix her disastrous implant results wanted to do more work on her, but she was already burned by the whole endeavor:

“She suggested I come BACK for fat transfer. ..but I KNEW I was never touching my body again. God made me perfectly me…& due to my mental health & encouragement of those around me to put a bandaid on body dysmorphia…my poor decisions had more consequences than I originally thought. It was more than just scar tissue (frankentitties) I was walking away with….I had lost 95% of my natural breasts…not to mention a 2nd emergency surgery due to a hematoma the SAME day!”

But we also can’t imagine getting a procedure and ending up with the opposite result. She laments about her current chest issues:

“I am FLAT. I can hardly fill a triple A cup …the smallest bra made. I try to force myself to wear things without padding…so I don’t “bandaid” over the issue as I had before. I talk about having a boys chest & being flat a LOT. Clearly I am still wickedly insecure some days & cover it with laughter.”

She’s sharing all of this to try to warn young women considering doing what she did and trying to upgrade their boobs:

“Vanity isn’t worth taking this risk. I seriously hope anyone considering tossing the dice on their health with body modifications knows the possibility of severe mental anguish that comes if it goes wrong. Coming from Hollywood, I have traded many horror stories with actresses and models….mortified at the results of their plastic surgeries. I heard more UNHAPPY stories in secret than happy…and was shown some horribly botched stuff they’d hide from the public. The human body doesn’t LIKE stuff put into it.”

Finally she makes one last plea:

“Love yourself and heal what is wrong without dropping 10k or more on something your body may reject.”

Does Adrianne’s experience with plastic surgery make YOU less inclined to go for it? Let us know in the comments and check out the full post (below)!