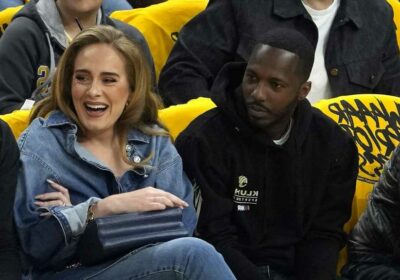 If there’s one thing Adele and Rich Paul love to do, it’s sit court side with their pals at an NBA game. On Friday night, they were in San Francisco enjoying the Warriors vs Mavericks in Game 2. The 34-year-old Grammy winner went with a classically stylish casual look, wearing dark wash jeans and an oversized denim jacket on top.

She dressed up the double denim with a pair of nude heels and chunky gold hoop earrings. Adele kept her makeup minimal and her boyfriend was wearing a black Nascar hoodie and jeans with white sneakers. 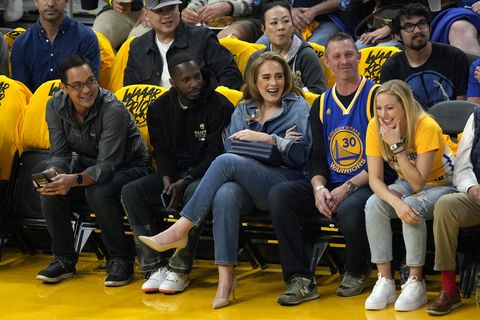 They were seated with people in NBA merch, seeming to laugh and chat with their neighbors when they weren’t talking with one another. Just a week ago, Adele shared a carousel of photos celebrating her relationship with Paul, which she captioned, “Time flies,” adding a heart emoji.

In the photos, they’re traveling to promote her newest album, enjoying a softball game, and kissing backstage at one of Adele’s events. The couple became public about their relationship last summer and recently moved in together into a mansion in Beverly Hills formerly owned by actor Sylvester Stallone. This is the fourth property Adele has purchased in the neighborhood, according to the Daily Mail.

This mansion is 18,587 square-foot and was designed by Richard Landry. It has eight bedroom and 12 bathrooms, plus a professional movie theater, a cigar room with an air-filtration system, and a home gym. Moving in together is a big step and Adele has talked about wanting to have more children soon, as well. Adele shares one child with ex-husband Simon Konecki.

In February, Adele said during an interview on The Graham Norton Show, “I would like to have more children – I only just feel like I’ve caught up with my sleep from nine years ago when I had my son.”