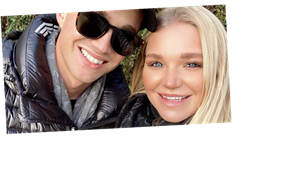 Abbie Quinnen and AJ Pritchard have broken her silence after it was revealed that Abbie was involved in a horrific accident.

The dancer was rushed to hospital by AJ, 26, and his brother Curtis and has stayed away from social media after the terrible incident.

Now, after news of Abbie’s accident broke, the couple have spoken out about the ordeal and shared a warning with fans on her Instagram page.

She wrote: “I am sad i have been absent in the last few weeks & haven’t posted much with AJ, we so desperately wanted to be able to share daily blogs with you all but Unfortunately I have had an accident.

“Whilst we were attempting to create a glass bottle into a vase following a YouTube tutorial, it went terribly wrong and it resulted in my incurring injuries & burns requiring continuous hospital treatment over the past 7 weeks.”

Abbie then warned: “I really need you all to be so careful with what you’re doing & if you’re copying any YouTube videos.”

She added: “I will be ok! I love you all! I also want to say a massive thank you to the nurses and doctors at the chelsea and Westminster burns unit for the incredible care & treatment”. [sic]

Meanwhile Abbie’s boyfriend AJ, 26, also spoke out about the real on his joint podcast with brother Curtis Pritchard.

She said: “It came out that the there was an accident with Abbie. And I just want to say just make it quite brief, to be honest.

“For anybody that hasn't seen the story yesterday where Abbie had an accident.

“I know we haven't replied to everybody. But yeah, thank you for that. And we will talk about it further down the line when we both feel comfortable.

“So yeah, just thanks for that love. It means a lot on your support, it keeps us all going.”

It comes after it was reported that AJ and Abbie were filming a hack for a social media on how to cut a glass bottle in half to be used as a vase when things went wrong.

The trick involves dipping a rope in a flammable chemical and wrapping it around the bottle before lighting the rope on fire.

But, the “hack” is said to have gone wrong when the wine bottle exploded in dancer Abbie’s face and set her hair and clothing alight, which caused third degree burns.