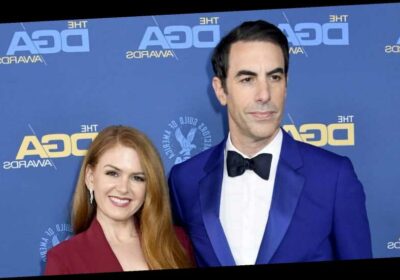 It's a funny story — because when things involve Sacha Baron Cohen and Isla Fisher, it's always a funny story. Though the two are no stranger to red carpets, big-time events, and hamming it up for the cameras together, the couple is also private when it comes to other things, such as their kids. The family of five has stayed under the radar, even with huge projects like Borat Subsequent Moviefilm, The Great Gatsby, and Now You See Me to their names.

Here's everything you need to know, from the six-person wedding to the three kids and Cohen's facial hair transformations. According to The Sun, Fisher met Cohen at a party in Sydney in 2002. Cohen said it was love at first sight — they spend the night roasting everyone at the party — but he also mentioned that he's still not sure whether or not Fisher feels the same way.

"She was hilarious," Cohen told The New York Times. "We were at a very pretentious party, and me and her bonded over taking the mick out of the other people in the party. I knew instantly. I don't know if she did. It's taken her about 20 years to know."

The two kept their dating life under the radar for nearly three years. In 2004, they announced that they were engaged and Fischer explained that she enrolled in an intensive three-year course to convert to Judaism.

"I will definitely have a Jewish wedding just to be with Sacha. I would do anything — move into any religion — to be united in marriage with him," she told the Evening Standard.

Fisher said that being with Cohen can be … challenging. When she watched Brüno with her mother, things got weird, she told Conan O'Brien.

"I was just staring at the screen, and I could feel my mom's eyes turned to me at one point … like, 'Really, you marr — this is it?'" she said.

She also explained that Cohen was the one who encouraged her to shift her career after she wasn't getting roles in dramatic films.

"Sacha was the reason I got into comedy. I was actually auditioning for a lot of dramatic roles and having no success at all," she told Indie London. "I was losing confidence in my abilities when he recommended that I do comedy. He felt I was really funny, so when someone as funny as him recommends that, I listened and actually auditioned for Wedding Crashers, which ended up being my big break." The two wed in Paris and their wedding was very, very private. People reports that only six guests were present.

"It [was] very important to me to have a beautiful ritual celebrated with my family and friends. And when you are in the public eye, to keep that private and to make it happen without it being really visible is really difficult," she told Allure, according to the Sydney Morning Herald.

What's it like being married to Borat? Fisher admitted that even she gets embarrassed sometimes after Cohen's antics get a little out of hand.

Once, during an event with Jack Black, Cohen gave a speech that somehow mentioned boobs and Black's mom all at once.

"Jack Black said, 'Yeah, if I would've known the movie was going to be so great, I would've made a longer speech.' And then Sacha said, 'Yeah, like that woman who wouldn't shut up with the massive boobs.' And then Jack said, 'That was my mom,'" Isla said on an appearance with Conan O'Brien. "And then Sacha said, 'Well, big boobs are great! Isla wants big boobs! You want big boobs right, babe?'"

Fisher would go on to say that finding someone that's funny and supportive was like "winning the lottery."

"Life is filled with highs and lows, and you have a best friend to share it with you," she told Australia's Sunday Telegraph. "It's amazing. It's like winning the lottery, having a good partner."

Fisher and Cohen have a third child, a son named Montgomery.

Cohen's notorious method acting means that he's always in character, even at home. Fisher talked about that particular situation — and what it means for their marriage — when she was promoting Grimsby, a film that they starred in together.

"Of course [he brings the character home]. It's hard to drop the accent when you're doing it all day on set," Fisher said. "He's such a perfectionist. He'll do everything and anything to get the best joke possible into the movie, so it was definitely inspirational. He's so funny on set and it was a lot of fun."

And part of getting into character also means weird hair and mustaches, which Fisher says she — and the kids — just look at as part of the job.

"You live with the handlebar mustaches, the mohawks, everything, the costumes," Fisher said during an appearance on Lorraine. Notoriously private about their children Fisher told Today that she and her husband made a conscious decision to keep their kids away from the spotlight. It's strictly professional though, she said, because away from the world of movies, she has people over to her home all the time and her kids are part of that.

"If you speak about your children or if you take them to a red carpet event, you can't be litigious later on when there is a picture of them in something and say, 'Hey, they deserve anonymity,' but they do," Fisher said. "They have rights, too. It's a very conscious decision and truly I would feel really disgusting about myself if I used my family to sell something. It wouldn't sit right with me. It doesn't line up with my values. But I do have an open-door policy and people come over all of the time. I do big Shabbat dinners. Everybody gets access to my family time once a week."

In an interview with Marie Claire, Fisher explained how she and Cohen balance fame and family.

"Juggling a family in L.A. isn't easy," Fisher said. "There's not really a culture of bringing your kids to dinner parties or to restaurants past 6 p.m. I tend to entertain at home because I want to be with my family — it's easier to put your kids to bed and have a wine with friends."

The couple attended the Golden Globes. During the red carpet pre-show, Fisher said that the two had engaged in "limo love" on the way to the ceremony.

"It was pretty good, let me tell you, it's not every day you get to be with a Golden Globe nominee … that's the benefit of a big poofy dress," she told Access.

The Cohen welcomed a new member to the family: a dog named Maisy.