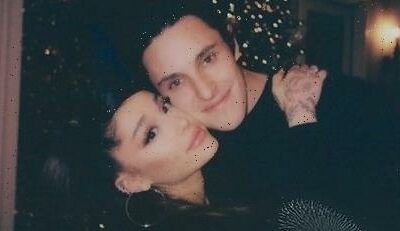 Hello, good afternoon, did you hear that Ariana Grande and her mans of approximately a year and five-ish month—yes, real estate agent Dalton Gomez—are married now?! TMZ reported the couple tied the knot with a low-key ceremony over the weekend with just 20 people to witness their union live and in person. I know it seems a little too good to be true, but Ari’s rep later confirmed the marriage news in a statement to People and added “the room was so happy and full of love. The couple and both families couldn’t be happier.”

So uh, now that Ari and Dalton are officially husband and wife, it’s time to go back (back to the beginning) and relive every single detail of their super cute whirlwind romance—you know, to (a) keep busy and (b) stop myself from weeping over that fact that my significant other has yet to propose!

Editor’s note: This timeline is in reverse chronological order, so all the recent and juicy details will be hanging out at the very top!

Ariana and Dalton get married in secret over the weekend!!! TMZ breaks the news first—their source says that Ari and Dalton exchanged vows at her Montecito home, and didn’t have much of a “ceremony” in favor of keeping it more “informal.” It’s also unclear if they planned getting married over the weekend or not.

Ariana’s rep confirms the marriage news in a statement to People, and provides some additional intel on what the big day was like: “It was tiny and intimate — less than 20 people. The room was so happy and full of love. The couple and both families couldn’t be happier.” A source also tells People that “Ari and Dalton love Montecito. They spend a lot of time there…It seems only natural that they would get married at Ari’s beautiful and historic house.”

No word from Ari or Dalton yet on the big news, but fingers crossed!

Wedding planning has officially commenced! According to E! News, Ari and Dalton “both do not want a huge extravagant event, so they are figuring out what their options are for an intimate ceremony,” their source explains.

Even though Dalton and Ari want a small ceremony, E!‘s source says the two “are very madly in love. Dalton treats Ariana like a queen and they have a lot of fun together.”

Wedding details for Ari and Dalton start to materialize, and it seems like they’re settling on a summer date to exchange vows! “Ariana and Dalton’s wedding will happen early summer,” an insider tells Us Weekly. “They have been looking at venues in a few different cities but are most likely choosing California.”

It also seems like Ari and Dalton aren’t in the mood for a big bash, either. Us‘ source says they want a “very small and intimate affair,” and adds that “nothing will officially happen until it’s safe,” referring to the pandemic.

Ari posts a rare snap of her and Dalton snuggling near the fireplace for no particular reason, but writes a v cute caption that says, “!!! my heart my person !!! thank u so much for being u.” Why are they so adorable?

A lil update on what’s happening in Ari and Dalton’s world: According to Entertainment Tonight, they “have been spending a ton of time together since getting engaged and keeping things pretty low key and private,” their source says. “They’re mainly keeping to themselves and just enjoying their time together.”

Sounds great, but the bad news is that some of Ari’s closest peeps “think the engagement was somewhat rushed and are skeptical that the relationship will ultimately be short lived.” Yikes.

Dalton spends his first Christmas with the Grandes as Ari’s fiancé, and all appears to be well as he’s seen posing with her family members!

BIIIIIG NEWS: Ariana and Dalton are engaged! Ari announces the news on her Instagram with a gorgeous shot of the ring, cheekily captioning the snap “forever n then some.”

An Us Weekly source shares how Ari’s feeling post-engagement and says “she has really enjoyed getting to know and falling in love with Dalton out of the spotlight, something she didn’t get to do in her past relationships,” and adds “they are so in love and committed to spend the rest of their lives together.” Ugh, love to hear it!