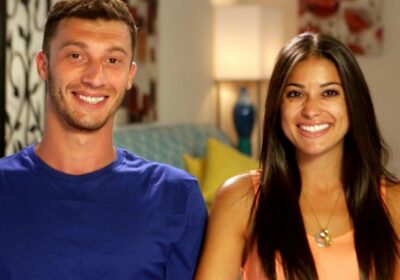 90 Day Fiancé fan favorites Loren and Alexei Brovarnik are now parents of two! The couple welcomed their second child, a baby boy, on Aug. 16, they announced on Thursday.

“Truly a Thankful Thursday!! Babyboten has arrived, much early than expected!” Loren shared on Instagram, posting photos from the hospital. “Due to some circumstances, he is in the NICU, but recovering well. We can’t wait to bring him home and start this next chapter as a family of 4! 🧿💙🤍 #teambrovarnik #boymama #beyondblessed.”

She later shared a video thanking all the fans for their support.

Alexei also Instagrammed a few priceless photos from the hospital.

Loren and Alexei are already parents to their 1-year-old son, Shai, and announced they were expecting their second child together in March. The two met while she was on a birthright trip to Israel, where he was working as a medic. They first starred in season 3 of 90 Day Fiancé, which documented Alexei coming to the United States to be with Loren after they met.

The now married couple are now one of the most popular success stories of the hit TLC franchise, and give their hilarious commentary on current seasons of 90 Day Fiancé on 90 Day Fiancé: Pillow Talk. ET spoke with the two in May, and Loren candidly opened up about how her Tourette’s has affected her second pregnancy and how supportive Alexei has been.

“I do have my moments and I’ve noticed them now with this pregnancy, they’re definitely a lot worse, especially at night, and there will be times when I’ll text him, like, ‘I’m ticking so bad, I don’t know why. I don’t know what’s going on,'” she shared. “And he’s like, ‘Your body’s changing, like, your body’s releasing the changes.’ So, he’s been very understanding and supportive.”

“It’s not what people think at all, it’s a normal person,” she added about people’s perceptions of those with Tourette’s. “When it comes to, like, our kids with it, it’s not something that we talk about or think about, really, because we can’t do anything.”

As for Alexei, he was matter of fact with ET when explaining why he wasn’t nervous about having more children.

“We decided not to really stress about it because there’s nothing we can do about it,” he noted. “We’re having kids, we’re having a big family, and if any of them have it then we’ll deal with it.”

90 Day Fiancé: Loren and Alexei Open Up About How Tourette's Has Affected Her Pregnancy (Exclusive)