Home » Celebrities » 56-Year-Old Mom Who Served As A Surrogate For Her Son & Daughter-In-Law Gave Birth!

56-Year-Old Mom Who Served As A Surrogate For Her Son & Daughter-In-Law Gave Birth! 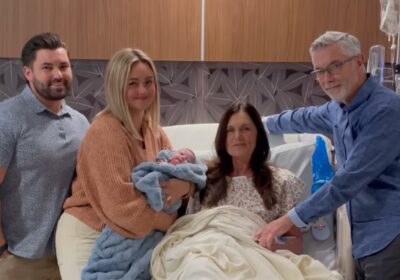 Great news! The 56-year-old mom who served as a surrogate for her son and daughter-in-law has given birth!

As we previously reported, Nancy Hauck offered to carry Jeff and Cambria Hauck’s fifth child when her daughter-in-law could not have any more kids after she underwent an emergency hysterectomy last year due to the difficult birth of her youngest set of twins. Speaking with SWNS, the grandma shared that the two had struggled with IVF before giving birth to their kids and this inspired her to help them bring in a new baby, explaining:

“I just suddenly had a feeling a few months after that I should offer to do it. I told my son, and he teared up and was shocked — I hadn’t even told my husband at that point. But he was really supportive.”

And now, their little one is finally here! Cambria announced on Instagram Friday that her mother-in-law gave birth to a baby girl on Wednesday. Alongside pictures and videos of the birth, the momma wrote:

“She is here and my heart could explode. She is perfect in every way. 11/2/22 is a sacred day for me now. It’s not only Hannah’s birthday but also the last day of the ‘day of the dead’ which is a holiday that celebrates ancestors that have passed on. And her ancestors on both sides had a HUGE part in getting her here. Not only that, but she was carried and brought into the world by her sweet nana, her ancestor. Nothing is a coincidence, and her birth date is not a coincidence either.”

“Her birth story was one for the books, it was so amazing and so spiritual. Words can’t accurately describe the feeling that was there, but it is an experience I will cherish FOREVER!!! Nancy is AMAZING in every way and example of what it means to embody her divine role as a woman. I’ll let her share the birth story and I will add my perspective later, but it was UNFORGETTABLE and I am forever changed. I’m so grateful to @jefe_hauck @nancyhauck and @jwhauck and their love, faith, and trust in the Lord, in us, and in the spiritual promptings and experiences we had during this journey.”

You can read their entire announcement (below):

In an interview with People on Friday, the family opened up about the experience, with Jeff calling it “a beautiful moment”:

“How many people get to watch their mom give birth? It’s really special that it gets to be my daughter.”

When asked if being in the delivery room with his mom had been awkward, the 33-year-old web developer said:

Meanwhile, Nancy revealed she had been in labor for about nine hours and called it “a remarkable and spiritual experience” to share with her family:

“Everything went perfectly and we are feeling so blessed to have her in our family.”

While the grandmother recovers from the delivery, she noted she’s “facing new emotions of having a baby, but not bringing the baby home with me afterwards,” adding:

“It is a mix of deep gratitude and some sadness from the separation.”

And even though Nancy and her husband Jason Hauck are not first-time grandparents, the pair admitted they’re in “new territory” with Hannah:

“I hope that we won’t treat Hannah any differently. But we’ll always have that connection — that Nancy carried her for nine months. Just the magic of the whole experience will always be unique in our eyes.”

“In my heart I want all of my grandkids to know that they’re equally as loved, and I would’ve done it for any of them.”

As for why they chose the name Hannah for their baby girl? Jeff said he and Cambria chose it to honor her grandma. He recalled to the outlet that his mom “woken up in the middle of the night, and she heard a little voice that said, ‘My name is Hannah’” six days after she received the positive pregnancy test. When the family looked up the moniker, Cambria said they found out that “the name Nancy comes from Hannah,” adding:

“They both mean grace. I knew instantly that that was her name.”

What a very sweet tribute! Congratulations to the Hauck family!