Home » Celebrities » 25 times the royals showed off their dance moves

25 times the royals showed off their dance moves 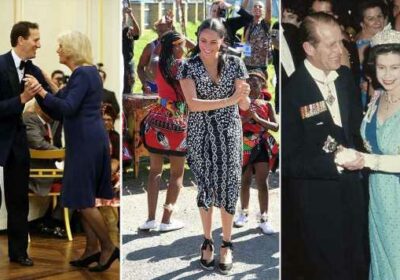 As if we needed another reason to find all our favourite royals totally relatable! Just like the rest of us, the likes of the Duke and Duchess of Cambridge, the Queen and Prince Charles all love a boogie – and we have the pictures to prove it.

Perhaps our most prevalent dancing royal, though, is the Duchess of Cornwall, who is known to be the first on the floor and has even gained the nickname of ‘dancing Duchess’ – though how can we forget Prince William gamely throwing some shapes during engagements over the years.

The Duchess of Sussex also showed off her moves on the royal tour of Africa during her visit to the Nyanga township.

Dancing has long been a special part of royal family tradition – Queen Victoria was known for her love of Scottish jigs, even having a ballroom constructed at Balmoral for her dance parties. Over the years, our reigning Queen has of course danced in front of many during various visits and engagements – including during a visit to Ghana in 1961, when she beamed as she took hold of the country’s president and tried the Ghanaian ‘shuffle’. The moment was re-enacted in Netflix’s The Crown series in 2018.

WATCH: Prince Charles and the Duchess Of Cornwall dance on their royal tour of Ghana in 2018

During Charles and Camilla’s royal tour of Canada, the Prince of Wales couldn’t help but get involved with a traditional Dene drum dance. The royal got encouraged to join in the conga-style dance, and he smiled as other dancers took selfies as the line wound around the room.

It was an energetic start to the Duke and Duchess of Sussex’s royal tour of Africa in September 2019. The couple travelled to the Nyanga township and were greeted by amazing performances by the locals. Meghan couldn’t resist joining in and couldn’t contain her giggles as she clapped her hands and twirled around with the dancers.

MORE: Jobs before they married into the royal family: Kate Middleton, Duchess Camilla and more

Duchess Kate couldn’t resist taking Paddington Bear by the paw during a charity event at London’s iconic train station in October 2017 – to the delight of everyone watching! William and Harry, who were also at the event, couldn’t stop giggling as she was spun around by the children’s character.

The Duchess of Cornwall was announced as Royal Academy of Dance's new vice patron during a video call with Dame Darcey Bussell and Angela Rippon CBE. Camilla revealed during the conversation that she had been taking part in the RAD's Silver Swans ballet classes once a week when she's in London and online from her Scottish home, Birkhall, during the coronavirus lockdown. Here's Camilla showing off some moves at a dance class led by the Royal Voluntary Service in Banbury in January 2020…

The ‘dancing Duchess’ in action! No doubt she was thrilled to meet Strictly Come Dancing judge Craig Revel Horwood back in 2009, when he taught her the cha cha cha during a visit to St Clement Danes School. The pair have met on a number of occasions since, and even seem to be unlikely friends – Camilla has also tried some moves with former Strictly professional Brendan Cole. Jealous, us? Never.

Who can forget William and Kate's 2012 royal tour of the Far East, when they danced with local women during a visit to South Pacific island Tuvalu. If that's not joy written all over their faces, we don't know what is!

We adore this shot of the Queen (then Princess Elizabeth) and Prince Philip hand-in-hand at a square dance in 1951. The event was organised in their honour in Ottowa, during their tour of Canada – we are loving the 30-year-old Prince's Western-inspired outfit!

This gorgeous snap of Princess Diana dancing with John Travolta is one of the most famous of the late royal. The picture was taken at the White House during her visit to America in November 1985.

Remember when Prince William tried to do the robot? Exhibit A. He learnt the move with the Scariofunk Dance Collective during a visit to Caius House Youth Centre in September 2016, and we have to say we're pretty impressed.

Even earlier, in 2011, he danced with with Vanessa Boateng on a day out at charity Centrepoint, as wife Kate looks on and laughs. The Duke has joked about his dance moves in the past, asking one young dancer: "Can you spin on your head? Thats always what I ask people who do street dancing. I can't do it, I can't even dance properly anyway. If I were to break dance, I'd literally break myself!"

You can't visit the Caribbean without getting into the island spirit can you? Here's Prince Harry dancing with soca singer Claudette Peters and the Prime Minister of Antigua and Barbuda, Gaston Browne.

Prince Harry showcased his ballet skills during a vist to the YMCA East Ealing. His dance moves went down a treat with his young audience.

Prince Charles and Princess Diana dance together at a ball during their tour of Australia on October 31, 1985 in Melbourne.

Charles was photographed having a go at traditional Mexican clog dancing in November 2014.

A 2006 photograph of the then Kate Middleton dancing with close friend Guy Pelly, who is now godfather to baby Prince Louis. The pals danced up a storm at a pre-Wimbledon party hosted by Sir Richard Branson at London's The Roof Gardens.

Duchess Camilla dances with royal photographer Arthur Edwards as she attends a tea party during her visit to Bristol in February 2017.

Her Majesty was pictured dancing with Air Marshal Sir John Baldwin, colonel of the 8th Hussars, at a ball held at the Hyde Park Hotel, London, in November 1954. The ball celebrated the centenary of the Battle of Balaclava. Just look at her beautiful ballgown!

The Prince of Wales dances with Zulemita Menem at the President's Dinner in Buenos Aires, 1999, during his two day visit to Argentina.

Crown Princess Victoria of Sweden beams as she dancing at her royal wedding to husband Daniel in 2010. The happy couple took to the floor after their wedding banquet at the royal palace in Stockholm, to the delight of all their guests.

Prince Albert of Monaco does a celebratory wiggle during the the women's team final in Artistic Gymnastics at the Olympics in Rio de Janeiro, Brazil, in 2016. He has been spotted showing off his moves on a number of occasions, including when he celebrated ten years on the throne in 2015 – with a Robbie Williams concert! The popstar performed at the palace, with Albert getting straight up on his feet during the hits.

In fact, Monaco's royal family are never afraid to strut their stuff! Here's Prince Albert, his then-fiancée Charlene Wittstock and Princess Caroline showing off some very bold moves at an Iggy Pop concert on the Prince's Palace square in 2010.

The annual Rose Ball in Monaco is also the ideal excuse to hit the dancefloor – here's siblings Charlotte and Pierre Casiraghi dancing together in 2007.

Prince Philippe of Belgium danced with Queen Mathilde during their engagement party at the Royal Castel in Brussels 13 November 1999.

Princess Maxima was pictured dancing during a cultural festival at the Historical Foundation Museum in Saint Eustatius in November 2011.