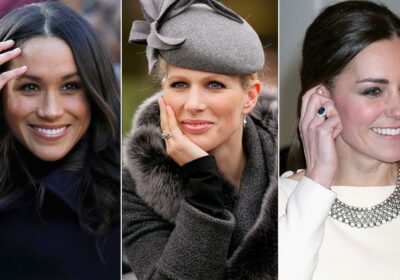 Royals have access to a wide variety of dazzling jewellery for their outings, but one item that is regularly on display is their engagement rings – and boy, aren’t they special?

Not only do the likes of Queen Maxima and the Duchess of Cambridge have some of the most stunning rocks, but many of them also have very special meanings. From Her Majesty the Queen‘s ring created from a tiara that belonged to Prince Philip’s mother, to Princess Beatrice‘s bespoke diamond ring designed by Edoardo Mapelli Mozzi, keep scrolling to see close-up photos of the most amazing royal engagement rings.

WATCH: The most iconic engagement rings of all time

The Duchess of Sussex’s engagement ring was designed by Prince Harry, and is a trilogy ring featuring a large central diamond, flanked on either side by two smaller jewels set on a gold band. However, in June it emerged that Meghan had made changes to her ring by replacing the band with a delicate diamond-studded band.

Harry had put a lot of thought into designing the ring and the stones were specially selected by the Prince; the central diamond is from Botswana, where the couple holidayed together, and the other two diamonds are from his late mother Princess Diana‘s personal collection. The ring was made by Cleave and Company, Court Jewellers and Medallists to Her Majesty The Queen.

Jack Brooksbank appears to have taken inspiration from Sarah Ferguson’s engagement ring when picking out a ring for Princess Eugenie. The striking ring resembles a flower, and contains a padparadscha sapphire surrounded by diamonds, which gives a beautiful pinkish orange glow.

Sarah, Duchess of York's engagement ring is one of the most recognisable royal jewels, and features a Burmese ruby surrounded by ten diamonds, forming a flower pattern on a yellow gold band. There are several similarities between her ring and the one now owned by her daughter, Princess Eugenie.

GALLERY: 10 of the most expensive celebrity engagement rings

We can see why Kate couldn’t take her eyes off her stunning engagement ring at the couple’s photocall to announce their happy news. Prince William proposed to his long-term partner with a sapphire and diamond ring that once belonged to his late mother Princess Diana, while they were on holiday together in Kenya in 2010.

Camilla looked delighted as she showed her dazzling ring as she celebrated her engagement at Windsor Castle on 10 February 2005. The art deco ring features a five-carat emerald-cut diamond in the centre, with three diamond baguettes on each side, and once belonged to the Queen Mother, Prince Charles' grandmother.

MORE: Take a better look at the Duchess of Cornwall's engagement ring

Princess Margaret‘s fiancé Antony Armstrong-Jones designed a very sweet engagement ring for the royal that was said to pay tribute to her middle name, Rose. Not only was it made out of rubies, but it was also shaped into a rosebud.

“He came to me and he knew he wanted a round diamond. He knew he wanted a modern classic; something that had a little bit of difference to it, that wasn’t just a classic that we see everywhere. That’s why he came to me,” he said. “So basically, what I wanted to do with him – because he had an aesthetic for art deco and Beatrice has an aesthetic for Victorian – we fused the two and mixed an art deco element with a Victorian element to the ring so that there was a fusion of their favourite aspects.”

Prince Edward proposed to Sophie Rhys-Jones with a ring from Garrard, which features a two carat oval diamond and two smaller heart-shaped gems set on an 18 carat white gold band.

RELATED: 10 mistakes to avoid when buying an engagement ring online

Princess Anne's daughter Zara Phillips was presented with a stunning ring designed by her long-term partner Mike Tindall when he proposed in 2010. The ring features a single solitaire diamond in the centre sat on a platinum band with several pave set diamonds.

Then Princess Elizabeth announced her engagement to Prince Philip in July 1947, and the couple married four months later. The Queen’s three-carat diamond ring features a solitaire and five pave diamonds on either side on a platinum band, and was made using jewels from a diamond and aquamarine tiara that belonged to Philip’s mother, Princess Alice of Battenberg.

Crown Princess Victoria of Sweden announced her engagement to her personal trainer Daniel Westling on 24 February 2009, and showed a first look at her ring – a white gold ring with a round diamond solitaire. The ring was a break from tradition, as in previous generations royal couples had exchanged simple gold bands to mark their engagements.

Princess Madeleine of Sweden was given a stunning Asscher-cut diamond ring when she got engaged to Christopher O’Neill in 2013. The 4-carat stone is paired with a delicate pavée band.

READ: 12 dazzling sapphire engagement rings – and they’re not all blue like Kate Middleton’s

The Duchess of Cambridge's sapphire and diamond engagement ring previously belonged to Princess Diana, who was also given it as an engagement ring when Prince Charles proposed in 1981.

Crown Prince Haakon of Norway shared the happy news that he had proposed to girlfriend Mette-Marit on 1 December 2000, and her engagement ring was incredibly sentimental, having been worn by three generations of Swedish royal women. The yellow gold ring is set with diamonds and rings.

SHOP: 5 royal engagement ring replicas you can buy on Amazon

Queen Maxima of the Netherlands

Queen Maxima's engagement ring also has symbolic significance, as it has an unusual orange diamond – the national colour of the Netherlands. Maxima and Crown Prince Willem-Alexander announced their engagement on 30 March 2001, and married the following year.

The Queen’s daughter Princess Anne wore a sapphire and diamond set gold engagement ring from Garrard following her engagement to Captain Mark Phillips in 1973. The couple divorced in 1992, and she married Timothy Laurence in December of that year.

Prince Carl Philip of Sweden designed his wife Princess Sofia's engagement ring, ahead of his proposal in June 2014. The ring features a large central diamond sat on a band encrusted with smaller pavé diamonds.

Then Prince Felipe of Spain announced his engagement to TV newscaster Letizia Ortiz, giving the first glimpse at her engagement ring – a 16 baguette diamond ring with a white gold trim. The couple married on 22 May 2004, six months after announcing their engagement.

Crown Princess Mary of Denmark's elaborate ruby cut diamond engagement ring matches the national colours of Denmark, and was presented to her by Prince Frederik of Denmark when he proposed in autumn 2003.

MORE: 8 royal wedding venues and residences where you can marry too