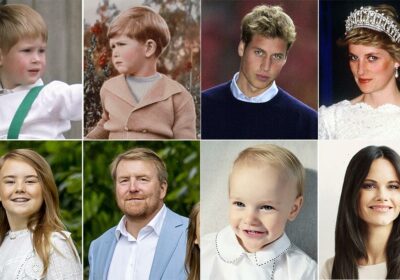 People in the same family tend to look alike, but some more so than others! The royal genes are strong and the resemblance between these royal parents and their children has made us all do a double-take.

From the time that the Duke of Cambridge mistook a photo of himself for his daughter, Princess Charlotte, to strikingly similar smiles, HELLO! has found some incredible royal lookalikes in our gallery…

When Prince Harry first sported a full beard on Christmas Day back in 2013, royal fans couldn’t get over the resemblance to his father, the Prince of Wales. Charles surprised attendees at the 1976 Badminton Horse Trials when he debuted facial hair. Like father, like son!

And growing up, Harry and Charles also looked very alike as kids. Take a look at these images of Charles aged four in 1952 and Harry at the same age at Trooping the Colour in 1988. They even sported very similar haircuts!

Royal fans have also noticed the similarity between childhood photos of Prince William and his daughter, Princess Charlotte.

In fact, the Duke of Cambridge even mistook a picture of himself for Charlotte when he visited Bradford in 2020.

Asking the woman who baked the cupcakes with the pictures of the royals on, William queried:  "Is that me? Doesn't it look like Charlotte?" to which an astonished Kate replied: "It looks so much like Charlotte." William then asked again: "Is that me?"

Upon confirmation that the photo was indeed of him and not little Charlotte, he said: "Oh my goodness that looks just like Charlotte. It's incredible, I haven't seen that before. Very alike in similarity. Well done you, that's a lot of hard work. Mary Berry would be very impressed right now. Incredible."

The Queen's only daughter, Princess Anne, certainly takes after her mother. The royal mother-daughter duo are even wearing similar outfits and brooches in these images.

Prince George made us all do a double-take when he wore a red and white outfit from children's designer Rachel Riley, that was identical to the one that dad William wore to meet baby brother Harry in 1984.

King Felipe and Princess Leonor of Spain are another father-daughter duo who share striking similarities. The 16-year-old princess is heir to the Spanish throne and when she becomes monarch in the future, she will be the country’s first Queen regnant since Isabella II, who reigned from 1833 to 1868.

Lady Sarah Chatto is the apple of her late mum Princess Margaret's eye. The Queen's younger sister shared two children with her ex-husband Antony Armstrong-Jones, whom she divorced in 1978. Princess Margaret died in February 2002, while photographer Antony passed away in 2017.

King Willem-Alexander and Queen Maxima of the Netherlands have three daughters, but it's the monarch's youngest daughter, Princess Ariane, 14, who shares the most likeness to her father.

The resemblance between Prince William and his late mother, Princess Diana in these photos is uncanny! The future king is pictured on his first day at university in 2001, while Diana is seen on a royal tour aged 25 in 1986.

Nine-year-old Princess Estelle is the image of her mother, Crown Princess Victoria of Sweden in these sweet side-by-side photos.

Prince Gabriel, then aged two, might be blonde but he has his mother Princess Sofia's blue eyes. Prince Carl Philip and Princess Sofia of Sweden recently welcomed a third son, Prince Julian, in March 2021.