Since he was a child, Omar Thaher had been overweight. At six years old, he tipped the scales at 110 pounds—largely the result of an unhealthy mindset toward food. “I have always found comfort in food and struggled to control what and how much I ate,” the 20 year-old aspiring fitness influencer from Mississauga, Canada, says. “I constantly would binge eat and use food whenever I was stressed, bored, unhappy, as a distraction from my problems.”

As he grew up, his weight also ballooned. He’d enjoyed sports, especially basketball, but his size made it hard to stay active. Instead, he retreated further into food. “I would binge eat as much as I wanted, and whatever I wanted, pretty much all day, often eating until I felt sick to my stomach,” he says. “I became lazier and more dependent on food as not only a way to fill me up, but almost a hobby. It was something I looked forward to; stuffing my face and eating to capacity was something I hated enjoying.”

He remembers the exact day of his heaviest recorded weight: April 3rd, 2018. That day, Thaher was 19 years old, and weighed 438 pounds. He’d become depressed and self-isolating, dropping out of school. That day, looking at the scale, he dedicated himself to changing. “I felt ashamed and disappointed with how far I let myself go,” he says. “I was determined to change and finally take control of my life again.”

“Starting off,” Thaher says, “I really went into it with an all-in mindset.” That meant hitting the gym every day, even as he learned the basics thanks to friends and online tutorials. At his size, he initially stuck to low-intensity cardio, biking or walking on the treadmill while he stoked his resolve. “I needed to prove to myself I had the potential to get it done and I didn’t have to be the person I was before I started this journey,” he says. He’s now doing a six-day push-pull leg routine along with at least four days of cardio (usually HIIT) a week. He’s on a high-protein, low-carb diet with IF/OMAD (intermittent fasting/one meal a day). 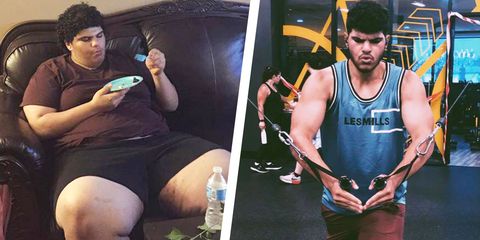 In just over 16 months, he’s lost more than 200 pounds. He’d like to lose 20 to 30 more pounds; 17 pounds would get him to 219, half his weight when he started. Once he’s satisfied with his weight, he wants to start bodybuilding, to add muscle mass and strength. “I am nowhere close to finished; I am actually just getting started,” he says. “I have so much planned to help not only myself but as well as the community and to spread a positive message.”

Thaher says dropping the weight has really given him a purpose. “I want to set an example and help inspire others to become a better version of themselves, whether that means losing 20 pounds or whatever else,” he says. “I am as well physically and mentally feeling better than ever, and continue to get more confident with who I am on the inside and out every day.”