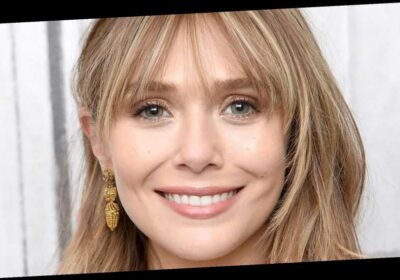 I'm sure I'm not alone when I say I consumed WandaVision like a tall glass of water on a hot day. It was a few turns deeper than most superhero franchises, but with enough excitement and suspension of disbelief to transport me from the couch I've been on for the last year. WandaVision might be over now, but I finished the last episode with a new appreciation for Elizabeth Olsen — and thanks to YouTube, I found some of her beauty secrets for the taking.

Or rather, Paul Rudd and Mark Ruffalo's beauty tips. In a 2019 "get ready with me" tutorial that Olsen shot for beauty brand Bobbi Brown, the star explains that all of her best tips came from her two Avengers: Endgame co-stars. With a cast full of 20+ stunning actors, it's no wonder that beauty wisdom was flowing fast and furious amongst them (personally, I want Chris Hemsworth's hair tips).

In Olsen's delightfully goofy, slightly demented tutorial, she mentions that she learned her concealer application method — tapping it on with her ring finger — from either Rudd or Ruffalo. "Because I look more tired than I hopefully usually do, I use a little bit of the corrector underneath my eyeballs to cover these bags," she says. "And I just kind of tap it on with my fourth finger, because apparently it's the weakest finger on your hand, and the eyes are very sensitive. And I think I learned that from either Paul Rudd or Mark Ruffalo." After dabbing on some of the peachy concealer, she says that she likes to use the brand's Illuminating Moisture Balm to cover up the natural wrinkles around her lips. That segues into her next borrowed tip: "Sometimes when I have concealer on it makes my lips start to feel dry, so I'm going to use the Bobbi Brown Extra Lip Tint. It's moisturizing, but it also brings some color to your lips. I also learned that from Mark Ruffalo." She tops it with the Crushed Lipstick in Angel, "because I want my mailman to think I'm an angel."

Great advice, but considering how Paul Rudd's aged like fine wine (if at all), the next bit is even more revealing. After commenting that she looked a little washed out, Olsen starts giving herself a "natural glow" with the brand's Pot Rouge. "It's a cream base, so it looks really natural and you don't have that powdery look. You just put a little bit on, and you blend it in on the apples of your cheeks. Something I learned from Paul Rudd." Most surprising to me is that Rudd hasn't played a vampire yet, as he appears to have aged approximately none since the '90s. Per the actor, that's due to sunscreen — but with this new intel, maybe he's been supplanting it with cream blush for a natural glow this whole time. It's clearly working, so sign me up.

Shop the rest of Olsen's favorites, below.