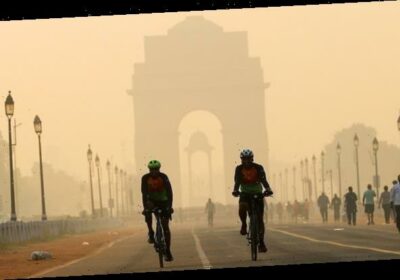 New Delhi was the world’s most polluted capital for third year in a row in 2020: India was home to 35 of worst 50 cities

New Delhi was the world’s most polluted capital city for the third straight year in a row in 2020, a new report has revealed.

India also had the largest share of cities in the ‘most polluted’ category outside of capitals, taking up 35 of the top 50 spots.

But neighbouring Bangladesh emerged as the country with the worst air quality overall, with Pakistan in second place and India in third.

Scroll down to see full ranking 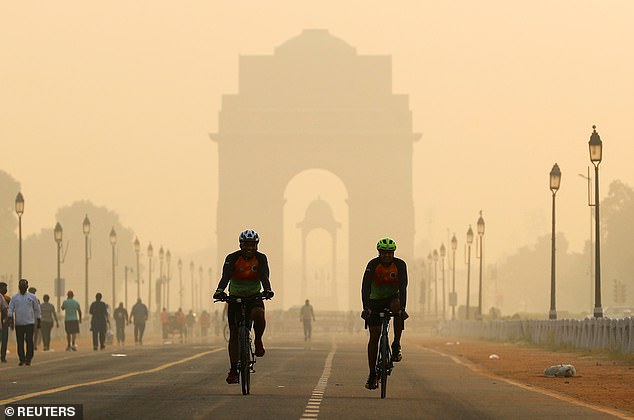 New Delhi emerged as the world’s most-polluted capital city for the third year running in 2020, researchers have said (file image) 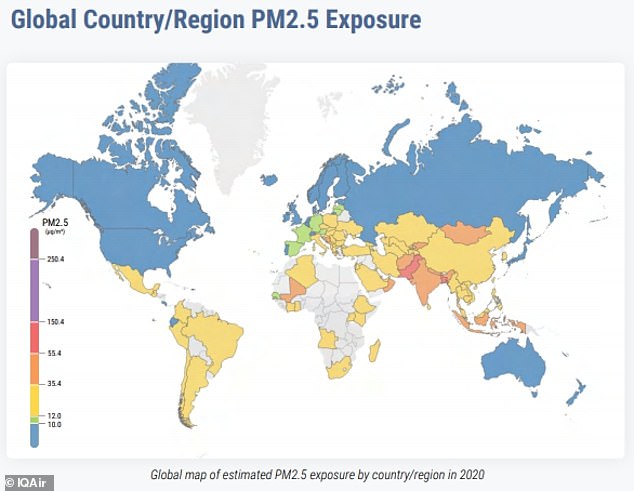 Overall, India had the third-worst air quality of any country, with Bangladesh in first and Pakistan coming in second

The ranking, put together by Swiss group IQAir, is based on the amount of harmful pollution molecules known as PM2.5 found in the air.

The group focuses on PM2.5 molecules because they are the most damaging to human health, and have been linked to diseases such as cancer and heart problems.

The figure marks a significant drop from 2019 when it stood at 98.6, but was still enough to see New Delhi top the table.

Researchers said they recorded a significant improvement in global air quality in 2020, largely due to Covid shutdowns which reduced fossil fuel consumption.

But investigators warned that impact is likely to be temporary and will reverse quickly when Covid lockdowns come to and end.

Dhaka, the capital of Bangladesh, was revealed as the second-most polluted city at 77.1 micrograms of PM2.5 per cubic meter of air, while Ulaanbaatar, in Mongolia, came in third at 46.6.

Both of their positions were unchanged from 2019, though the actual figures were down significantly from 83.3 and 62.0 respectively.

Kabul, in Afghanistan, came in fourth – also unchanged on 2019 – while Doha, in Qatar, rounded out the top five in the first year it has been included in the analysis.

Bangladesh was the most polluted country overall, with a PM2.5 level of 77.1, seven times the WHO limit, while Pakistan, India, Mongolia and Afghanistan made up the rest of the top five, in that order.

The world’s least-polluted countries where data was available were Puerto Rico, New Caledonia – a French territory in the Pacific – and the US Virgin Islands.

Capital cities with low pollution included Charlotte Amalie in the US Virgin Islands, Stockholm in Sweden, and Helsinki in Finland.

Air pollution caused an estimated 54,000 premature deaths in New Delhi in 2020, according to a recent study by Greenpeace Southeast Asia Analysis and IQAir.

Researchers warned that the impact of poor air quality on health is likely to get worse in the coming years because it may contribute to severe Covid infections, with the disease likely to remain in circulation for some time.

They also cautioned that many countries and cities lack data gathering facilities to make their survey comprehensive.

The study included 106 countries for which data was available – up from 98 in 2019 but short of the 193 sovereign states recognised by the UN.

‘Air pollution continues to present one of the world’s biggest health hazards to people everywhere, contributing to about7 million premature deaths annually. 3.6million of these deaths are children,’ the report’s authors wrote.

Puerto Rico emerged as the country with the best air quality, and was well within what the WHO considers to be safe limits (file image) 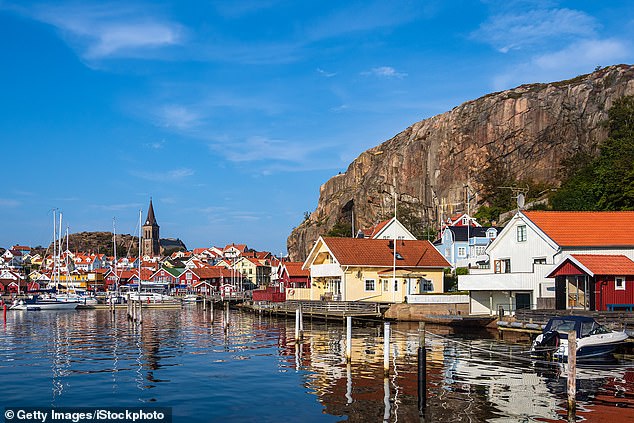 Sweden also emerged as one of the countries with the best air quality, ranking 103 out of 106, while Stockholm was also named one of the least-polluted capitals (file image)

‘Compounding this staggering health crisis, air pollution is estimated to cost the global economy upwards of $2.9trillion per year due to fossil fuel emissions alone, while also contributing to a range of severe environmental problems.

‘The COVID-19 pandemic emerged as a major, exceptional factor influencing air quality during 2020.

‘Termed by some the “largest-scale experiment ever” into air quality, the temporary reduction in fossil fuel consumption caused by lockdowns around the world correlated with significant decreases in air pollution compared to previous years.

‘Due to the circumstances of these improvements, pollutant concentrations are likely to rebound.

‘While continuous contributions to air pollution globally stem from the burning of fossil fuels and industrialization, the mutual benefits of combating those who contribute to both climate change and air pollution are increasingly evident.’ 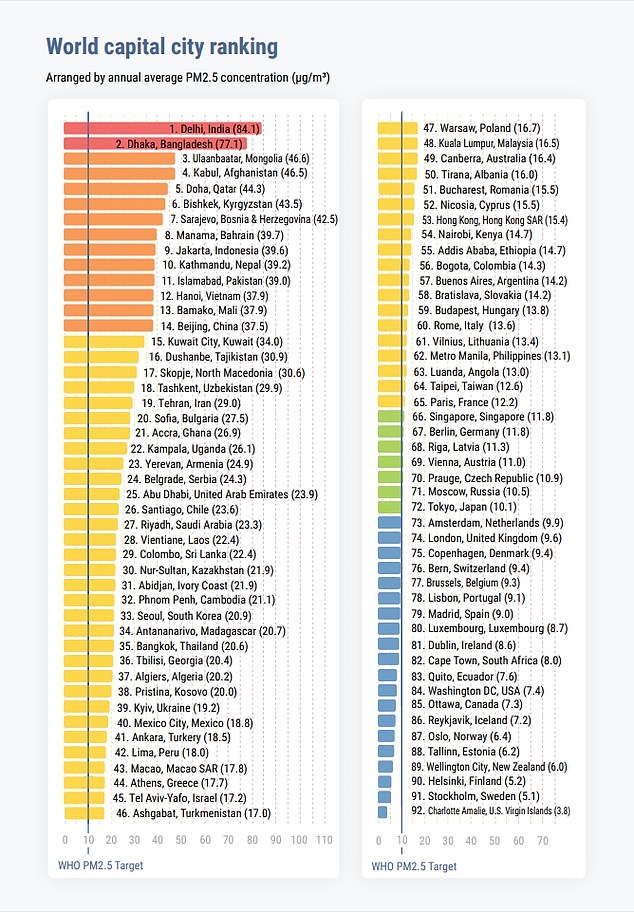 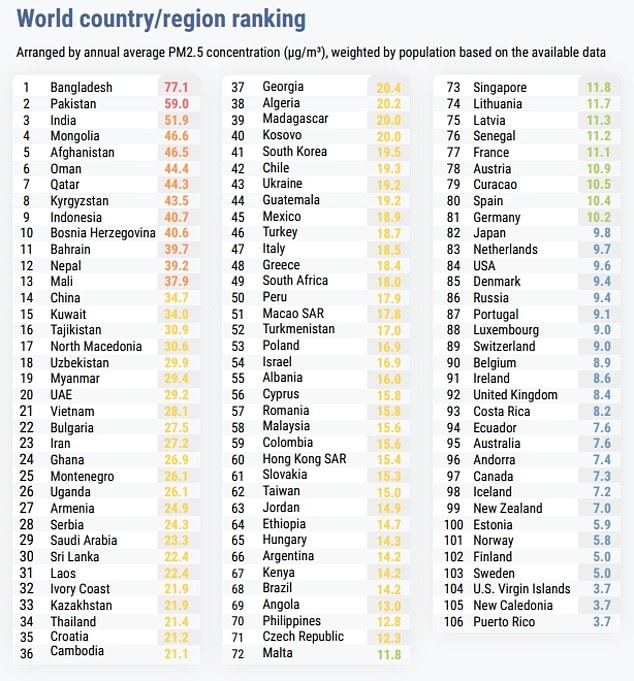