London: Julian Assange's legal team tried but failed to adjourn the extradition hearing for the WikiLeaks founder until after the US presidential election at a court hearing in London on Monday.

Assange appeared at his long-delayed hearing wearing a dark suit, light-coloured business shirt and tie, he was clean-shaven and his white hair was neatly cut. He sat behind a glass pane to watch proceedings. 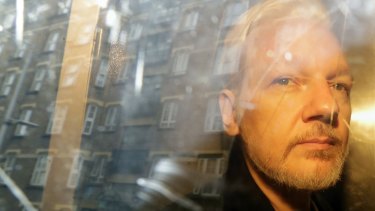 Julian Assange transported from court in London in 2019.Credit:AP

It was the first time he had been seen in a courtroom since February; his image was a stark contrast from his dishevelled, bearded appearance in April 2019, when he was dragged into a prison van after being arrested at the Ecuadorian embassy in Knightsbridge. Assange had been living there since seeking political refuge in 2012 to avoid facing sexual assault charges in Sweden.

When asked if he consented to be extradited to the United States where he is accused of 18 counts of violating the Espionage Act stemming from WikiLeaks' publication of classified military and diplomatic cables in 2010, Assange paused before responding: "No."

Assange is in jail at Belmarsh prison on the outskirts of London, having been denied bail in March.

He was re-arrested on a new indictment containing the 18 charges, none of which were new although they were expanded in their detail. The Australian-born 49-year-old faces a jail term of up to 175 years if convicted in the United States. 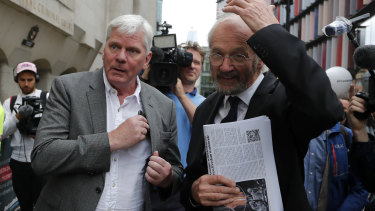 Editor-in-chief of WikiLeaks, Kristinn Hrafnsson from Iceland, left, and father of Julian Assange, John Shipton, speak to the media in London.Credit:AP

The charges claim that Assange conspired with hacking organisations including Anonymous and LulzSec to obtain information for WikiLeaks to publish.

The US alleges Assange put out a "Most Wanted Leaks" wishlist of secret information he sought, specifying US "military and intelligence documents" classified as SECRET.

SECRET is the classification US officials give to information they deem would seriously damage national security if made public.

Court documents said that it was to this "Most Wanted Leaks" wishlist that former Army intelligence officer Chelsea Manning replied. 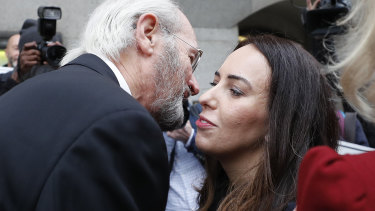 Julian Assange’s father John Shipton and girlfriend Stella Morris greet each other in front of the Central Criminal Court Old Bailey in London.Credit:AP

Manning was convicted at a court-martial in 2013 of hacking the Pentagon's computer network and supplying Assange with the four databases of information published by WikiLeaks involving more than half a million files.

The US government says WikiLeaks put lives at risk when it published the names of Iraqi and Afghan human intelligence sources who provided information to the US government, as well as those of journalists, religious leaders, human rights advocates and political dissidents from repressive regimes.

Included in the files was a video of a 2007 Apache helicopter attack by American forces in Baghdad that killed 11 people, including two Reuters journalists.

Assange's lawyers — who said it was the first time they had seen him in six months — claimed that the new indictment was served at the "eleventh hour" and asked District Judge Vanessa Baraister to adjourn the proceedings until January 2021— after the US Presidential election on November 4 and closer to the inauguration of either Joe Biden or Donald Trump.

The judge rejected Assange's plea. She said his legal team turned down the chance to request one in August and only persisted after losing an earlier ruling.

"These proceedings have now been going for 18 months and if adjourned again they are likely to be relisted causing further and significant delay," she said.

"For now this application is refused." 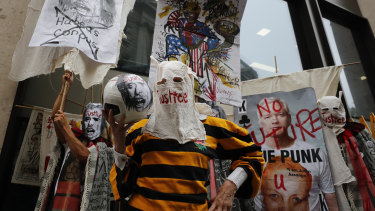 British Fashion designer Vivienne Westwood, centre, with her head covered, poses for photos during a protest to support Julian Assange outside the Central Criminal Court Old Bailey in London.Credit:AP

"It's an abuse trial," Shipton said. "Julian is a publisher, a publication is WikiLeaks…It's an oppression of journalism and free press everywhere in the Western world," he said.

A van with a billboard featuring a picture of Assange's face with the words "Don't Extradite Assange" and "journalism is not a crime" was driven outside the courtroom where media and protesters were gathered.

The hearing resumes on Tuesday and is expected to run for four weeks until early October.