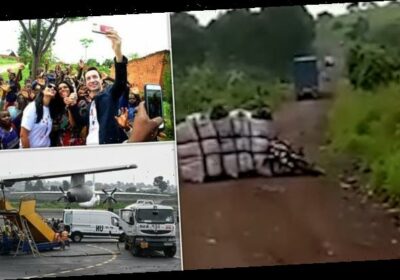 Footage purportedly showing the moment a UN convey came under attack by two gunmen who killed an Italian ambassador and two others has been released.

The attack occurred on Monday in the Democratic Republic of Congo, and saw the deaths of ambassador Luca Attanasio, 43, Italian military policeman Vittorio Iacovacci, 30, and their Congolese driver, whose has not been identified.

On Tuesday, Rwandan Hutu rebels denied accusations they were behind the ambush – believed to be a botched kidnapping – of the UN’s World Food Programme (WFP) convoy, and instead blamed the armies of the DRC and Rwanda.

Meanwhile, Attanasio’s and Iacovacci’s coffins were repatriated today, with pictures showing them being loaded onto a military plane to be returned to Italy. 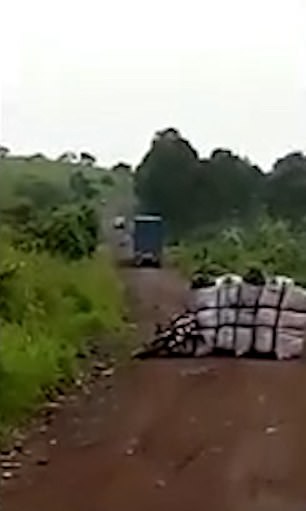 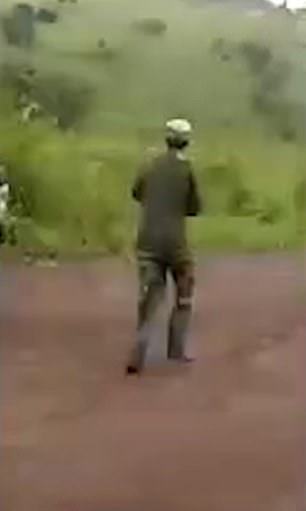 Pictured: Still from a video purportedly showing the moments a UN convoy came under attack in the Democratic Republic of Congo. Right: One man wearing camouflage gear clothes is seen running up the road towards where the truck is stopped, as other people move in the opposite direction

Monday’s attack occurred north of the North Kivu capital of Goma on National Highway 2 – a road that runs through thickly forested, mountainous terrain next to the porous border with Rwanda.

The video that has been released shows vehicles stopped on a dirt road flanked by forest, including what appears to be a toppled motorbike and a truck.

At first, there is little activity in the footage, with people behind the camera talking.

But half-way through, the video cuts to a scene of chaos, with gunshots heard over the sound of people shouting.

One man wearing camouflage gear is seen running up the road towards where the truck is stopped, as other people move in the opposite direction.

Some people are seen apparently watching, cheering and even dancing on the side of the road as gun shots are heard, before the camera points to the sky.

The vehicles are not shown again in the video, and it is unclear which vehicle Attanasio and his party were in during the incident. 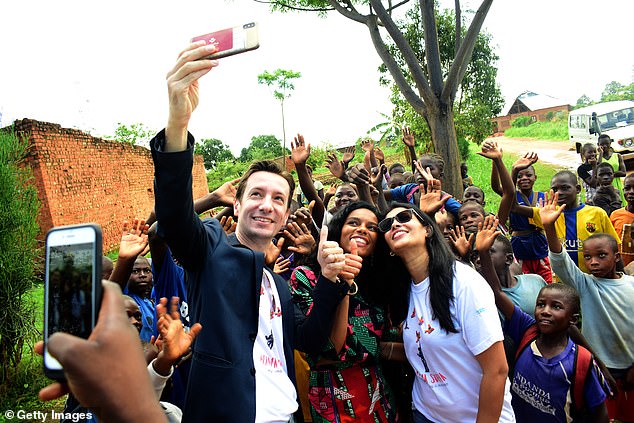 Attanasio, pictured holding a phone to take a selfie, was married and had been stationed in the Democratic Republic of Congo for three years 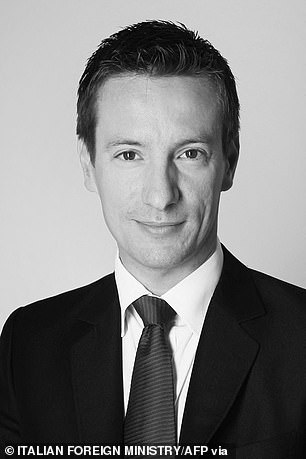 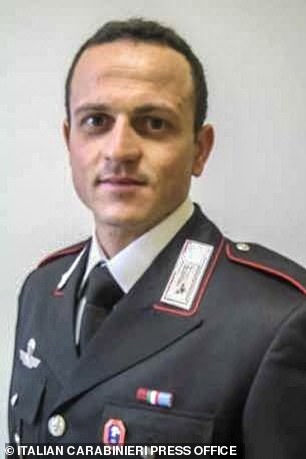 He left on Monday morning in a two-vehicle WFP convoy heading for Kiwanja, in the Rutshuru area, accompanied by his bodyguard and WFP workers, it said.

The convoy was ambushed three kilometres (1.8 miles) from their destination by six assailants, armed with five AK-47 assault rifles and a machete.

‘They proceeded by firing warning shots before forcing the people in the vehicles to get out and follow them into the depths of the (Virunga) park, which they did by shooting dead one of the drivers to create panic,’ the president’s office said.

Park rangers and army troops nearby heard the noise and pursued the attackers.

‘Five hundred metres (from the site of the ambush), the kidnappers fired point blank at the bodyguard, who died on the spot, and at the ambassador, hitting him in the abdomen,’ the presidency said.

Attanasio was rushed to hospital in critical condition, but died of his injuries. Several other members of the convoy were also injured.

After the Italian government expressed shock and outrage at the attack, newspapers in Rome on Tuesday raised questions about security preparations for the trip. 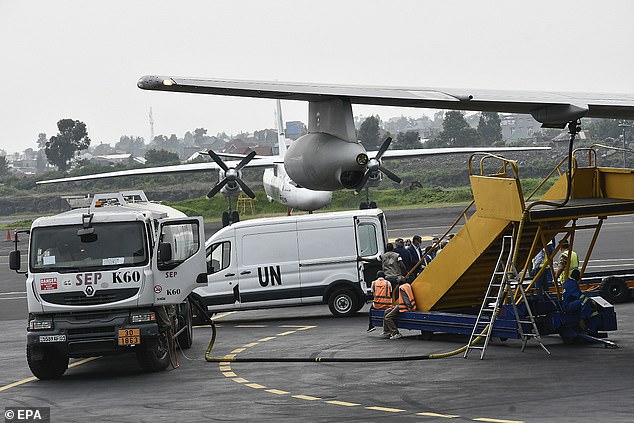 Pictured: A coffin is loaded onto an Italian Air Force plane at Goma airport during the repatriation of the bodies of Italian Ambassador and an Italian Carabinieri police officer in Goma, Democratic Republic of Congo, 23 February 2021 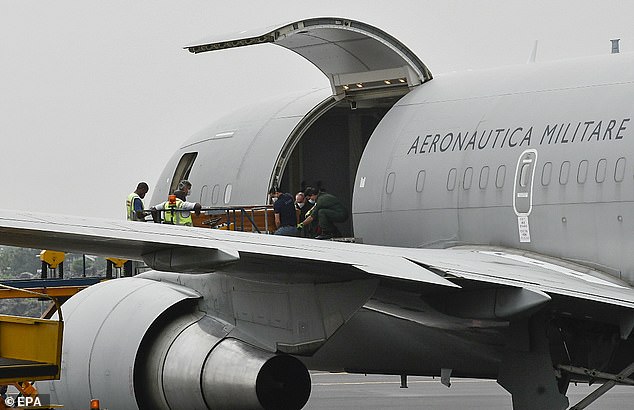 Attanasio and Iacovacci’s coffins were repatriated today, with pictures showing them being loaded onto a military plane to be returned to Italy

Speaking to Italian news agency Ansa, Salvatore Attanasio – the ambassador’s father – said that his son was a person who would always help others with his projects.

‘In thirty seconds the memories of a lifetime have passed, the world has collapsed on us. These are unfair things, which must not happen. For us, life is over,’ he told the agency, recalling the moment he learned of his son’s death.

But now, he said, the family’s focus was on Attanasio’s three daughters, and ensuring that they had a bright future despite their father’s death. 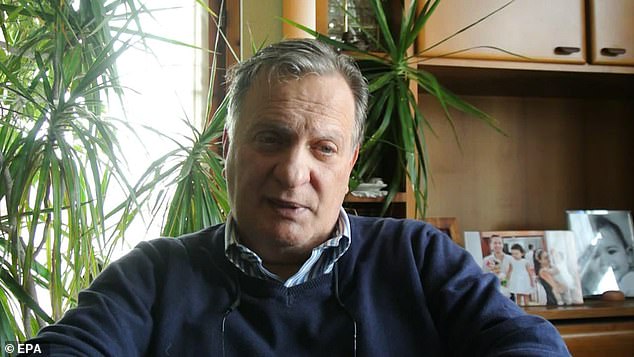 Pictured: Salvatore Attanasio, the father of the slain Italian Ambassador Luca Attanasio, during an interview in Rome, Italy, 23 February 2021

The DRC interior ministry, in a statement on Monday, said the security services and provincial authorities had not been given advance warning of the trip.

‘(They) were unable to provide special security for the convoy or come to its aid because of a lack of information about their presence in this part of the country, despite its reputation for instability,’ it said.

But the WFP, in a statement, said the attack ‘occurred on a road that had previously been cleared for travel without security escorts’.

A UN humanitarian official in the DRC, who spoke on condition of anonymity, said that this meant the convoy had to be a minimum of two vehicles.

The DRC’s interior ministry on Monday blamed the killings on ‘members of the Democratic Forces for the Liberation of Rwanda (FDLR)’ – a Rwandan Hutu rebel group that has plagued the region for more than a quarter of a century. 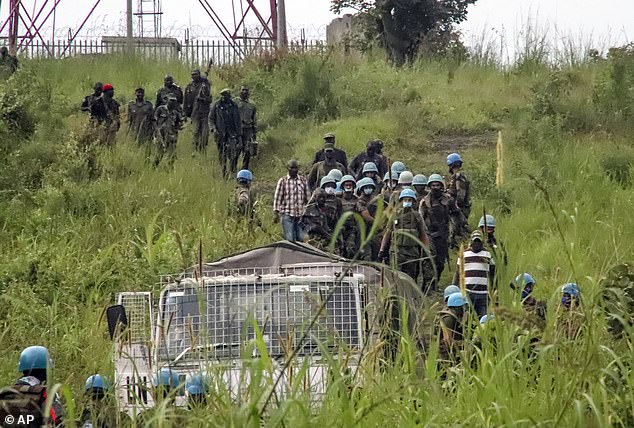 United Nations peacekeepers remove bodies from an area near to where a U.N. convoy was attacked and the Italian ambassador to Congo killed, in Nyiragongo, North Kivu province, Congo Monday, Feb. 22, 2021 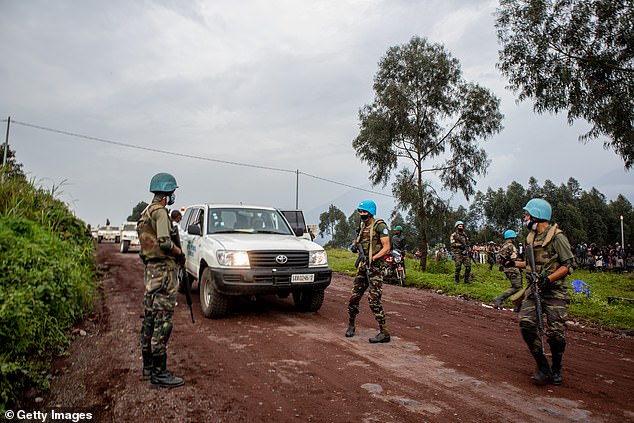 UN peacekeepers and Congolese armed forces stand near an ambulance transporting a victim from the site where Italian Ambassador Luca Attanasio was fatally attacked when the convoy he was traveling in came under attack on February 22, 2021

But the FDLR rejected the allegation, blaming the Rwandan army and the Armed Forces of the Democratic Republic of the Congo (FARDC) for the attack in a statement received by AFP Tuesday.

It said the ambassador’s convoy was attacked near the Rwandan border, ‘not far from a position of the FARDC’.

‘The responsibility for this despicable killing is to be found in the ranks of these two armies and their sponsors who have forged an unnatural alliance to perpetuate the pillaging of eastern DRC,’ it said.

The FDLR called on Kinshasa and UN peacekeeping force MONUSCO to ‘shed light’ on the killings ‘instead of resorting to hasty accusations’.

The DRC and Rwanda authorities have not reported the presence of any regular Rwandan troops in the DRC.

But an expert at the Kivu Security Tracker (KST), a US monitor, told AFP the Hutu rebel group has a known presence in the region.

‘The FDLR are near the place where the attack took place. It’s in the realm of possibility that the Rwandan rebels are responsible for this attack,’ the expert said, speaking on condition of anonymity. 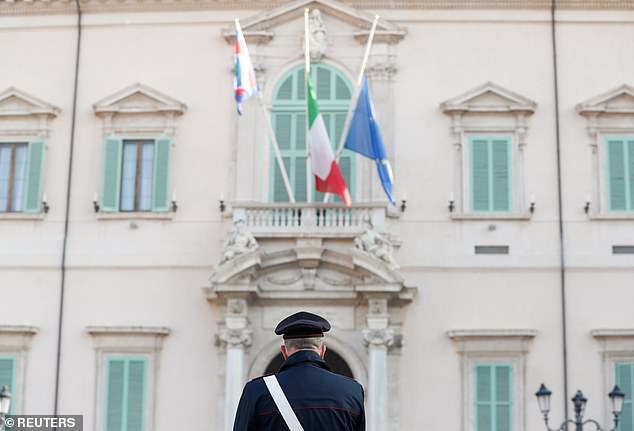 Pictured: A Carabinieri officer looks at the Italian flag that flies at half mast next to EU and Presidential Standard of Italy flags, outside the Presidential Quirinale Palace, following the death of the Italian ambassador to the Democratic Republic of Congo

Scores of militias roam the DRC’s four eastern provinces, many of them a legacy of wars in the 1990s that sucked in countries around central-southern Africa and claimed millions of lives.

Some of the FDLR’s founders were involved in the 1994 Rwandan genocide during which the Hutu majority slaughtered 800,000 people, mainly Tutsis but also Hutu moderates.

The group is opposed to the current Rwandan government, but has not launched any large-scale attacks in Rwanda since 2001.

Attanasio was awarded a peace prize in October 2020 in a ceremony held in a church in southern Italy.

The Nassiriya International Prize for Peace is named in memory of the 19 Italians, including 12 Carabinieri paramilitary officers, five soldiers and two Italian civilians, who were killed in the bombing of the Italian military base in southern Iraq in 2003. Nine others were also killed.

Attanasio was cited for ‘his commitment aimed at safeguarding peace between peoples’ and for ‘having contributed to the realization of important humanitarian projects, distinguishing himself for altruism, dedication and the spirit of service for people in difficulty,’ said La Repubblica daily in its account of the ceremony.

La Repubblica quoted Attanasio as saying, ‘All that which we take for granted in Italy isn’t in Congo, where, unfortunately, there are so many problems to resolve.’

Attanasio described the role of the ambassador there is ‘above all to be close to the Italians but also to contribute to achieving peace.’ Some 1,000 Italians live in Congo.

In Rome, Foreign Minister Luigi Di Maio said he would soon brief Parliament on the attack and cautioned against premature reconstructions of what transpired.

A moment of silence was planned in Parliament on Tuesday. Rome prosecutors have opened an investigation, which is done whenever an Italian citizen is killed overseas.

Flags at Italian government buildings flew at half-staff as tributes poured in for the two men.

In a front-page obituary in leading Corriere della Sera, the foreign ministry secretary general, Elisabetta Belloni, said Attanasio firmly believed that through multilateral diplomacy, he could help make the world a better place. 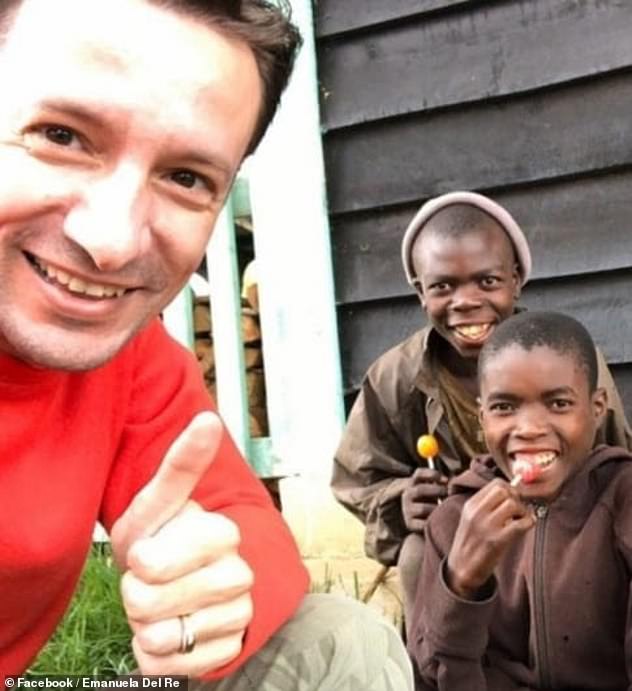 Luca Attanasio (left), the Italian ambassador to the Democratic Republic of the Congo, has been killed during an attack on a UN convoy 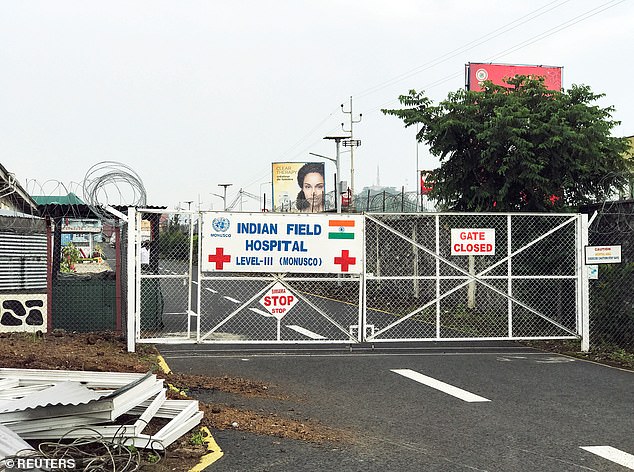 Attanasio died of his wounds at the UN’s Level III Indian Field Hospital. An Italian police officer was also killed in the attack

A vast country the size of continental western Europe, the DRC is grappling with numerous conflicts, especially in its remote, mineral-rich east.

Scores of militias roam the four eastern provinces. Many are a legacy of wars in the 1990s that sucked in countries around central-southern Africa and claimed millions of lives.

Monday’s attack occurred north of Goma – a region that includes the UNESCO-listed Virunga National Park, which has also been troubled by violence.

The UN’s refugee agency, the UNHCR, said last week that more than 2,000 civilians were killed in North and South Kivu and Ituri last year.

The attacks by brutal armed groups have also displaced millions in what the UN calls one of the world’s worst humanitarian crises.

There are 5.2 million people displaced in the DRC, according to the United Nations Children’s Agency, which said in a report on Friday that this represents more displaced than in any other country except Syria.

In the past year alone, 50 per cent of people have been displaced, it said. 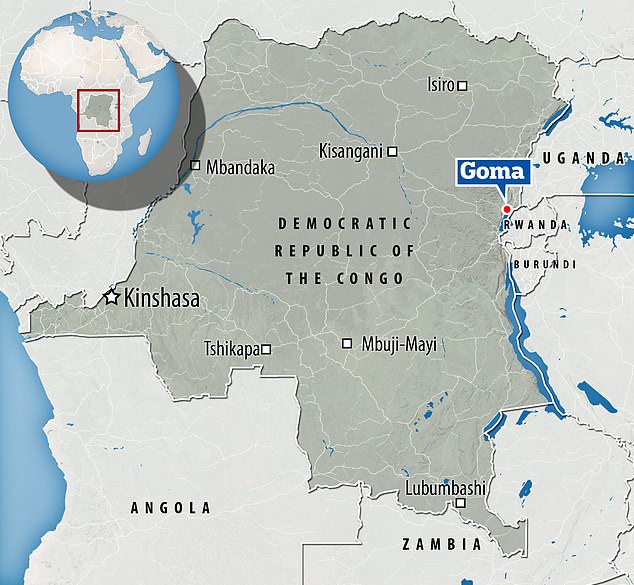 Monday’s attack occurred north of Goma – a region that includes the UNESCO-listed Virunga National Park, which has also been troubled by violence

The resource-rich nation suffered one of the most brutal colonial reigns ever known before undergoing decades of corrupt dictatorship.

Back-to-back civil wars later drew in a number of neighbouring countries. And many rebel groups have come and gone during the UN mission’s years of operation, at times invading the eastern regional capital, Goma, where the ambassador was killed.

In January 2019, Congo experienced its first peaceful democratic transfer of power since independence in 1960 following the election of President Felix Tshisekedi.

He succeeded strongman Joseph Kabila in a disputed election marked by allegations of large-scale fraud and suspicions of a backroom deal by Mr Kabila to install Mr Tshisekedi over an opposition candidate who, according to leaked electoral data, was the real winner.

The attack occurred in the same area where two Britons were kidnapped by unidentified gunmen in 2018, though they were released days later.

The UN peacekeeping mission has been working to draw down its 15,000-troop presence and transfer its security work to Congolese authorities.