Britain will be HOTTER than the Algarve this weekend 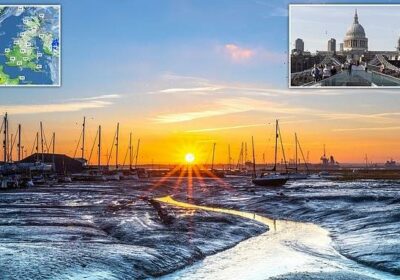 On the bright side! UK will be HOTTER than the Algarve with sunny 82F lasting into the weekend… after thousands of fed-up Brits flew back from Portugal to beat ‘amber list’ deadline

The UK has enjoyed fine summer weather over the past fortnight – and that is set to continue for at least the next few weeks as the UK approaches the final stage of the roadmap for ending all Covid-19 rules on June 21.

The mercury will be above 70F (21C) for the 13th day in a row today – continuing a remarkable turnaround that follows a miserable few months including the UK’s fourth wettest May on record and the coldest April since 1922.

Temperatures are set to be hotter than the Algarve this weekend, with 82F (28C) in London compared to 75F (24C) in Faro after Portugal was removed from the UK’s ‘green list’ for quarantine-free travel early this morning.

British tourists yesterday scrambled to leave Portugal ahead of its move to the ‘amber list’, while calls to delay the end of lockdown have split the Cabinet as evidence mounts that Covid jabs are keeping Britons out of hospital.

Health Secretary Matt Hancock has pledged that freedoms would be restored ‘soon’, but stressed it was ‘too early’ to assess if the end of lockdown – also known as ‘Freedom Day’ – will go ahead as planned in 13 days’ time. 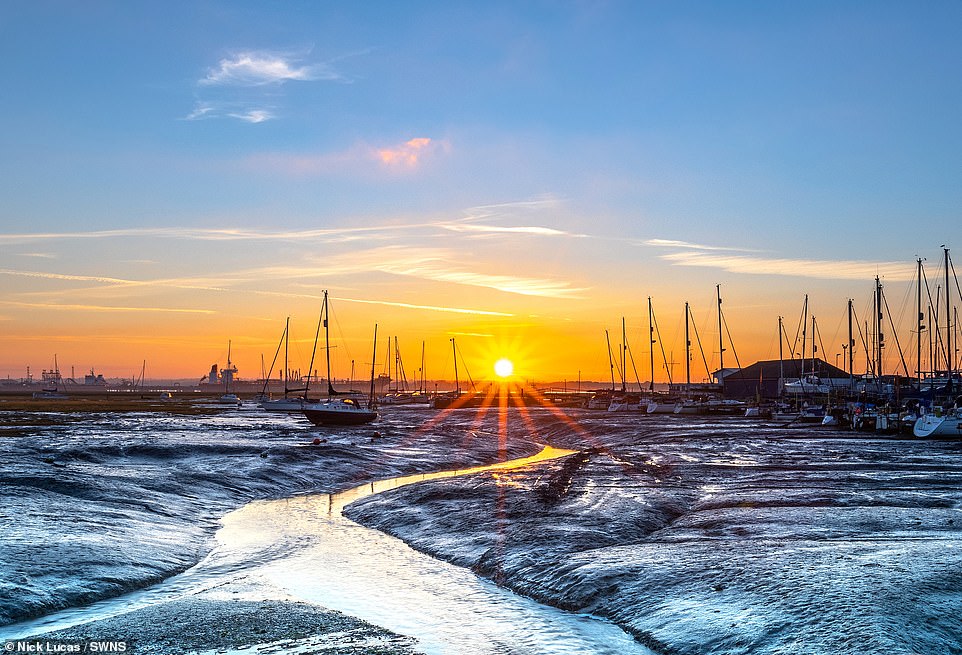 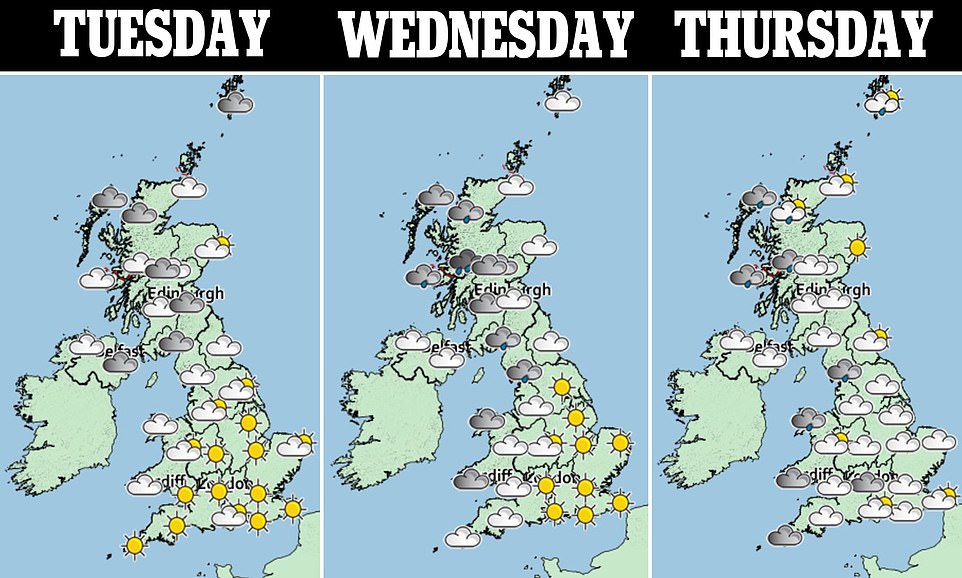 Met Office meteorologist Aidan McGiven said: ‘Plenty of fine early summer weather this week for many of us, but there will be some cloud and showers around at times, otherwise sunny spells and warming up from midweek.

Maximum temperatures in Britain will have been above 70F (21C) for the 13th day in a row today. Here are the UK highs for the previous 12 days, including the hottest day of the year so far which was recorded last week:

‘For North West England, for western Scotland and Northern Ireland, low cloud here, a few spots of drizzle, one or two showers into eastern Scotland.

‘But actually it’s towards the East of the UK at the moment where the higher temperatures are tending to be – the winds are coming from the South West, so 22C (72F) for Aberdeenshire. Come further south with all that sunshine, 26C (79F) in the South East.’

He added that high pressure was extending from the Azores, but there was still some influence from the Atlantic Ocean in the form of weak weather fronts ‘often trying to nibble away at that high from the North West’.

Mr McGiven continued: ‘They will bring some showery outbreaks of rain into northern and western parts of the UK, especially during Wednesday morning, some heavier and more persistent rain there for parts of western Scotland.

‘But the further east and south you are, the drier it will be, just a few spots of rain or light showers in places – the best of the sunshine in the South East. And temperatures are rising – 27C (81F) for London, and 20C (68F) to 22C (72F) in the north-east of Scotland.’

These weather fronts will be out of the way by the end of Wednesday, but there will still be a ‘humid south-westerly airflow’ which will result in a reasonable amount of cloud in western areas on Thursday.

There will also be some low cloud in places to start off the day across some western hills and coasts, especially around South West coasts, which could remain very gloomy through the day with some sea fog.

But Mr McGiven added: ‘Inland, I think the cloud will tend to lift and build, and it looks like there will be plenty of sunny spells, especially in the East by the afternoon, and those temperatures continue to rise, 28C (82F). Very little rainfall, it’s really only just patchy drizzle over some western hills and coasts.

‘And some more persistent rain coming into north-western areas early Friday, but that peters out. It’s associated with a cold front – a slice of cloud and some bits and pieces of light rain. 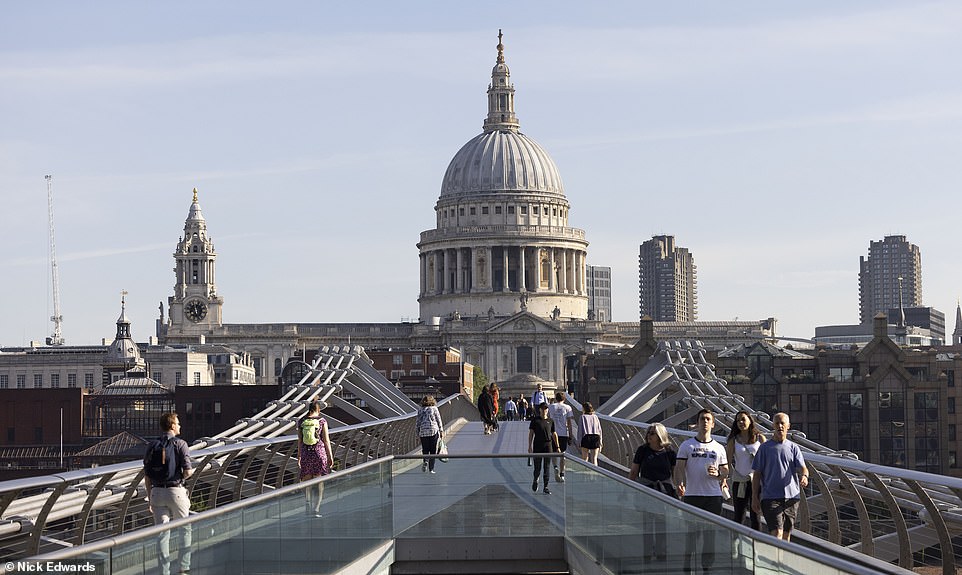 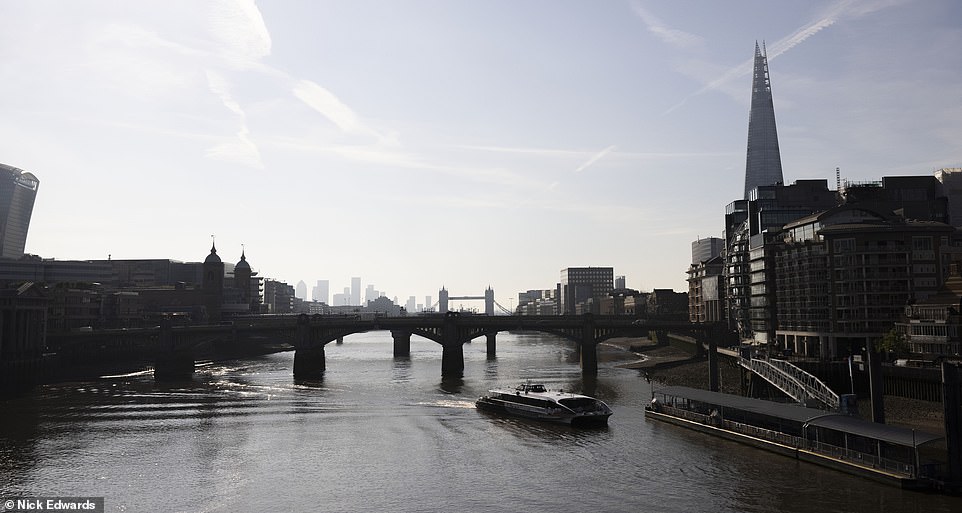 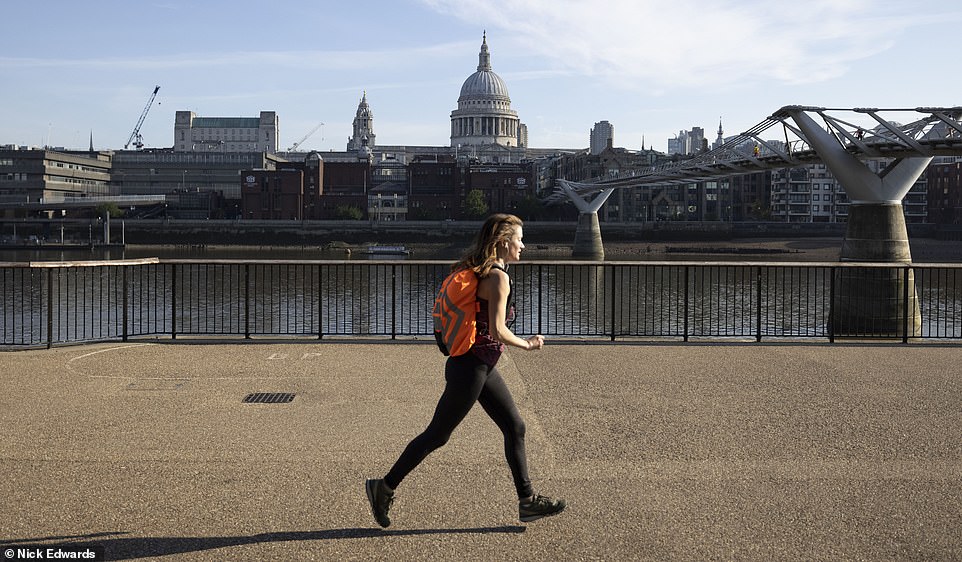 ‘Eventually it brightens up most places – there’ll be some sunny spells, but cooler air into the north behind that cold front, whilst it remains warm or very warm towards the South East, 28C (82F) or so.’

He said the jet stream will then buckle again with a low in the Atlantic pushing it north, and high pressure building in for the weekend. Temperatures will also ‘start to increase even further on Saturday and especially into Sunday’.

Mr McGiven added: ‘So on the whole this weekend, high pressure in charge, keeping it fine and warm for most. In some places you’d call it hot, and those temperatures may well be higher on Sunday compared to Saturday.

‘And Sunday is June 13. I’ll just leave you with this fact. June 13 is the only day of the summer in which 30C hasn’t been recorded in the UK – watch this space.’ 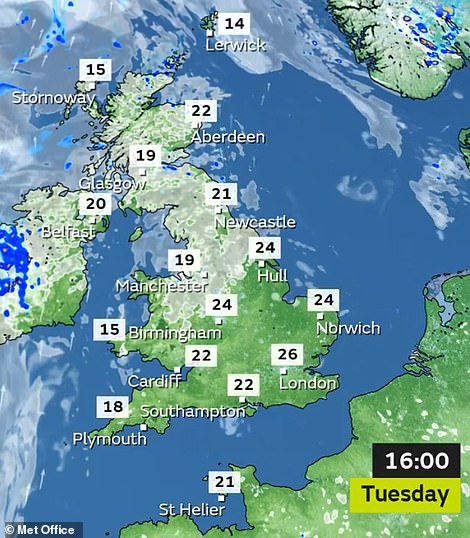 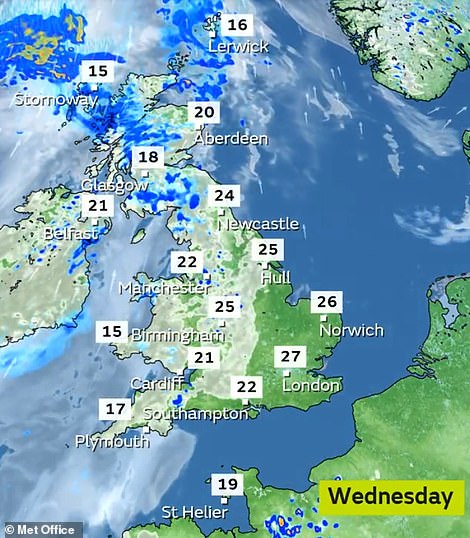 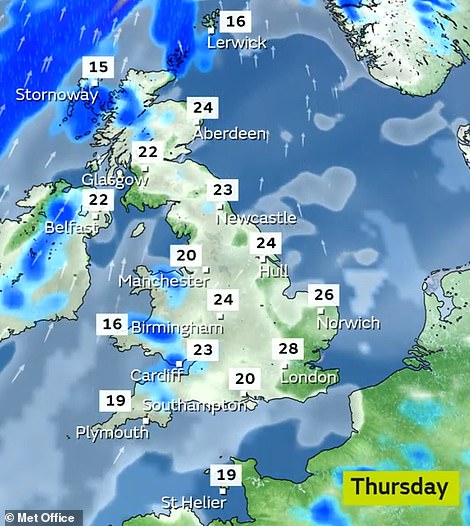 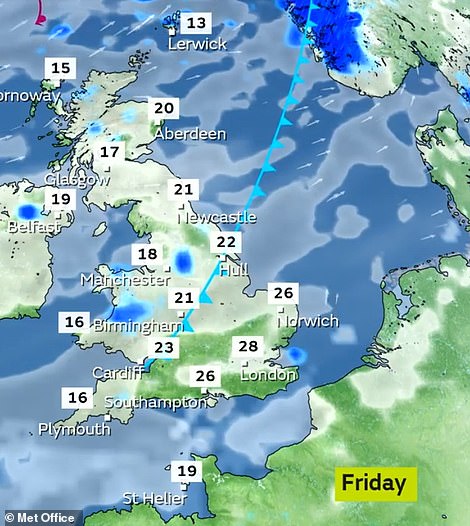 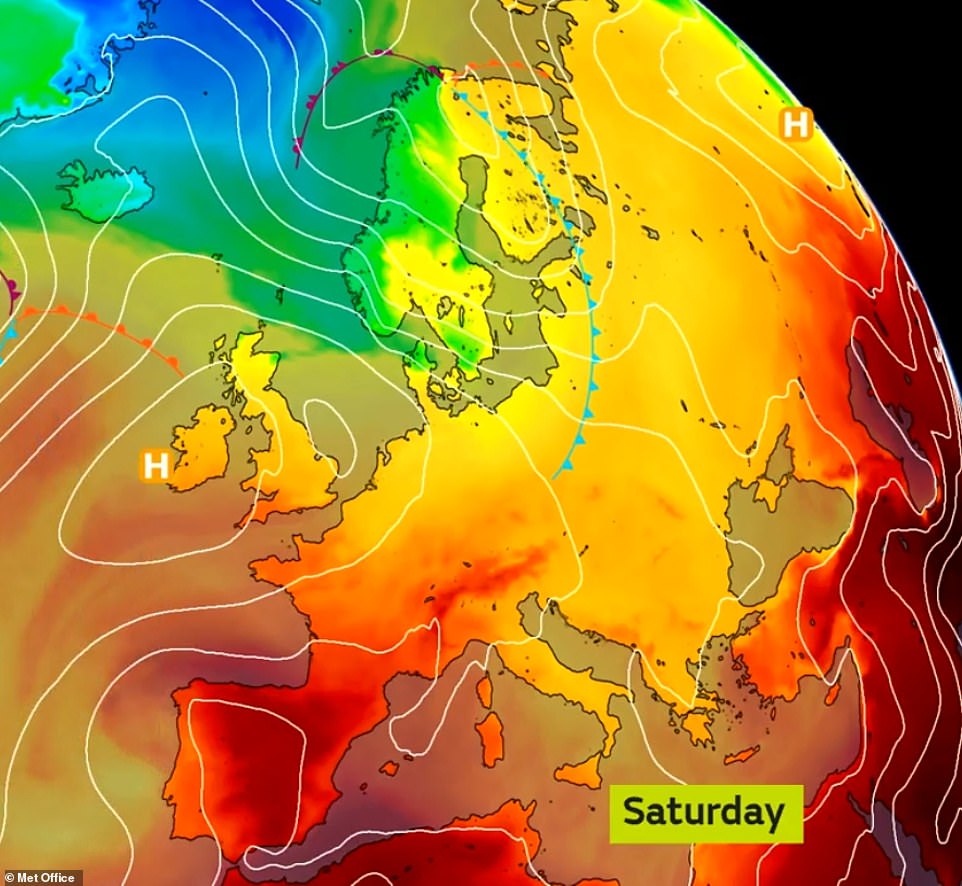 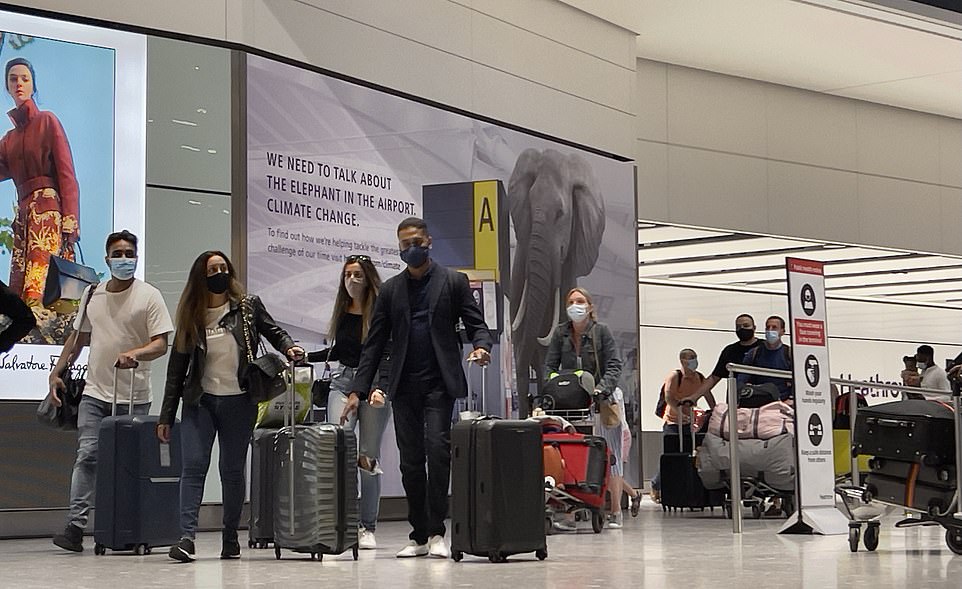 Looking further ahead, the Met Office has said that temperatures will ‘very warm, perhaps hot for a time’ from this Saturday into next week – before ‘returning to nearer normal by the end of the week’.

And from June 21, forecasters say: ‘A good deal of fine and dry weather across much of the UK for the end of June, although there could be a few showers in places and perhaps some rain in the far north at times.

‘By the end of June and into early July, conditions will probably become more unsettled with an increasing chance of rain spreading across the UK.’

Yesterday’s UK high temperature was 76.3F (24.6C) at Coningsby in Lincolnshire, and the country’s hottest day of the year so far was recorded last Wednesday when Northolt in West London hit 82.9F (28.3C).