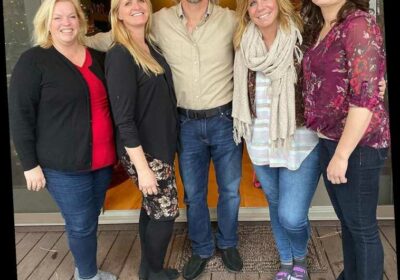 The Sister Wives may have once called Utah home, but it's no longer where the heart is.

On Sunday's episode of the hit TLC series, Kody Brown and his four wives — Christine, Janelle, Meri and Robyn — took a trip to the state to visit another plural family, the Dargers.

Joe Darger and his three wives — Alina and real-life sisters Valerie and Vicky — had "been very politically active for the cause of decriminalizing plural marriage in Utah," Kody, 52, explained to viewers. (Kody and his wives have a combined 18 children.)

But although they were looking forward to seeing the close family friends, going to Utah brought up some uneasy feelings for some of the Brown wives.

Recalling the moment they "first went public" as a plural family, "within just days of it really being announced, the police in Utah started to investigate us because plural marriage is a felony in Utah," Janelle said. "It was punishable by up to five years per count."

At the time, in January 2011, the family was "very afraid that they were going to come and arrest us," so they left the state "in the dark of night," Janelle said, adding, "We felt like we'd been exiled."

The Browns landed in Las Vegas, and after things had settled, they "sued the state of Utah, basically saying, 'Look, this law is unfair,'" Janelle recounted. "We won, so for a year … we were decriminalized. We're no longer felons."

The relief was short-lived, though. "The state of Utah appealed our lawsuit that we had won. They overturned it and then they doubled-down with a new law, HB 99," which "made it a worse felony for polygamists in Utah," Kody told cameras.

In 2020, "there was a bill introduced into the Utah senate, S.B. 102. What it was going to do was kind of revise that law that was passed a few years ago," Janelle said in a confessional. "It basically makes it so that people like our family, who live a law-abiding life but just choose for religious purposes to cohabitate, we're no longer felons."

For Kody, "What I do in my bedroom with another consenting adult is nobody's else's business," he said to cameras. "And so why do they think that they can legislate it? It's naive." Robyn claimed in a confessional that because of the law that was in place, many women were afraid to come forward and seek help.

"I think the lawmakers think that by decriminalizing this law it will make it so that it's a free for all and there will be more abuse that will happen," she said. "And what they're not realizing is that current law is so strict that it's making them so afraid to come out — and like, a mom, she's got a daughter that's getting abused and she is so afraid of going to the police because she's afraid they're going to tear apart her family and take her child away. So her daughter continues to be abused her whole life, which is like, insane and horrific."

Before they left for their trip, Kody and the women discussed whether they should all drive together. It was "obvious that we really don't like being together, the five of us," Kody said. But while Christine wanted the women to take separate cars, they ultimately traveled together in the same vehicle.

Janelle, for one, had concerns about going back to the state she once called home.

"I think for me, the biggest fear about going back into Utah, if we're pulled over for a traffic violation, are they going to use it as an opportunity to tack on the felony polygamy charge? Because that's usually how it works — they get you for something else and then they add it on," she said. "I'm always like, 'Don't speak, Kody, don't speak.' It's dumb, but it is a real fear." Robyn was also fearful of the possible consequences. "If you can imagine, it's like you're going to a place where your family is illegal. It just feels oppressive. It always makes me worry," she said in a confessional.

But they arrived safe and sound in Utah. After catching up over a meal with the Dargers, the Browns felt uplifted.

During the families' time together, they also discussed bill S.B. 102.

"The essential element is it amends the bigamy laws right now. In Utah, just to call each other wives, sister wives, is a felony," Joe told the group. "Now, instead of being a felony to call each other wives, it's an infraction. It'd be like getting a jaywalking ticket. … Right now it's a felony — you can go to prison for three to five years for it and then get back and go back in I guess, because you're still polygamist when you're done."

Added Christine to cameras: "Polygamy right now in Utah is a felony. We're sitting with fellow felons. We're felons just like them. They could come in and arrest us all."

Theoretically, "Kody, because he has one legal wife and three plural wives, could go to jail from anywhere from nine to 15 years," Janelle said. "Then your probation involves not seeing your children, not recommitting the felony, so basically if you saw your children again, then you were violating probation. That took you into the federal system. It's just a big mess."

In May 2020, the Browns and Dargers celebrated jointly when a law decriminalizing bigamy in Utah took effect.

"The Dargers were successful in decriminalizing polygamy in Utah, which was huge," Janelle previously told PEOPLE ahead of the season 10 Sister Wives premiere.

"That was one of the biggest reasons that we went public in the first place, was to try to make it not so scary to be open about your family," she added. "That's the whole point of why we went public, so this is wonderful to have had this happen. It's a big deal to us."