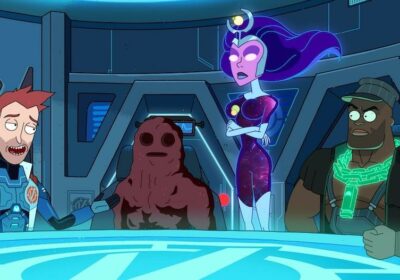 The fifth season of Justin Roiland and Dan Harmon’s Adult Swim series “Rick and Morty” premieres Sunday with an episode that promises to include another whacky adventure for mad scientist Rick (voiced by Roiland) and his not-so-sharp grandson Morty (also Roiland), and many more to come. But what you won’t get in Season 5 is a look at the Vindicators mission that Rick and Morty were famously not invited to — because that story is being reserved for the show’s digital spinoff series, “The Vindicators.”

“I can’t remember if it was the network that suggested it or if it was actually Erica [Rosbe] and Sarah [Carbiener], who wrote the [‘Vindicators 3: The Return of Worldender’] script in Season 3. But to me it was like, yeah that’s a really cool place to go for a spinoff, especially with how big Marvel is and the superhero genre in general is,” Roiland told TheWrap. “We had fun with the idea that the episode was the third Vindicators mission and that Rick and Morty had only been invited to one. So they’re like, ‘Wait a minute, you guys did one without us?’ And there is all this backstory to go into.”

For fans who might not remember, in Season 3, Rick and Morty go to what they believe to be the second mission of the superhero group The Vindicators, only to find out this is actually the third, and they were not invited to the second one due to “personality conflict” with Rick and the rest of the Vindicators on the very first mission, which resulted in the deaths of three members of the Vindicators.

Adult Swim ordered the “The Vindicators” spinoff, which will feature Supernova, Vance Maxiumus, Alan Rails, Crocubot and Noob Noob “as they fight crime, avert genocides, and yuk it up without Rick and Morty,” last month. Roiland, who is executive producing the show alongside Rosbe, Carbiener and Harmon, says they are still working through exactly what the digital series will look like, but promises “it’s going to be pretty great.”

“But I don’t want to say too much right now just because I don’t know how much is going to change or how crazy it’s going to get,” Roiland says. “But I do know it’s really cool that we’re getting to do it.”

“The Vindicators” spinoff will be around eight to 10 episodes in length, per Adult Swim’s initial series order announcement, and made available across digital platforms globally.

“I could be mistaken about this, but I think the full run of it is about the length of a full episode of ‘Rick and Morty,’” Roiland said. “It might be longer than that, but I’m pretty sure that’s about what it comes out to be. So it’s almost like an additional episode when it’s put all together.”