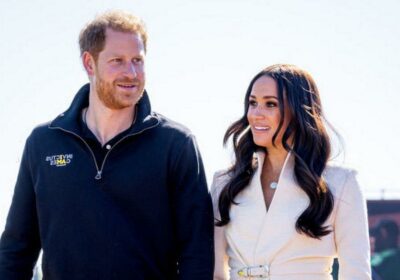 Prince Harry and Meghan Markle's Netflix crew have faced the ultimate royal snub after not being given accreditation for the Queen's Platinum Jubilee celebrations this weekend.

Sources claim that crew following the Duke and Duchess of Sussex will be faced with some stern words if they attempt to film during their upcoming trip to the UK.

The warning comes as Meghan and Harry prepare for their first public visit to the UK together since they stepped down as senior working royals in January 2020.

Since then, they've signed a multi-million dollar deal with the streaming giant and are reportedly filming their own fly-on-the-wall show.

Sources have now told The Telegraph that should the crew attempt to film the Sussexes from public areas, they will be "moved on".

Media from around the globe will be flocking to Buckingham Palace and other significant locations across London for the upcoming celebrations, celebrating 70 years of Her Majesty Queen Elizabeth being on the throne.

Film crews and photographers will be waiting to snap glimpses of the Queen and other members of the British Royal Family at places such as Buckingham Palace, St Paul's Cathedral and the Trooping The Colour pageant.

But, Netflix crews are allowed to travel to public spots along with the millions of well wishes, stewards will instantly ask them to move should they attempt to put any filming gear up.

While they are returning to England for the celebrations, Harry and Meghan faced a blow from the Queen who shunned them from the famous Buckingham Palace appearance.

After "careful consideration", the Monarch announced only senior working members of the House of Windsor will have their "balcony moment" on Thursday, June 2.

Joining the Queen on the balcony for Trooping will be Prince Charles, Camilla the Duchess of Cornwall, Prince William, Catherine the Duchess of Cambridge, Prince Edward and Sophie Wessex, Princess Anne and Vice Admiral Sir Tim Laurence.

Harry and Meghan are no strangers to cameras following them, with the former senior royals opening their doors to cameras during their trip to The Hague for the recent Invictus Games.

They were also pictured with camera crews in tail during their trip to New York in September 2021, when Harry was seen with a wire for a radio microphone popping out of his pocket.

Harry and Meghan struck a deal with Netflix to produce children's television shows, documentaries and films.

While Meghan's first animated series, Pearl, was scrapped by the streaming service, Harry is currently producing a documentary about the Invictus Games.

For more of the latest showbiz news from the Daily Star, make sure you sign up for one of our newsletters here.