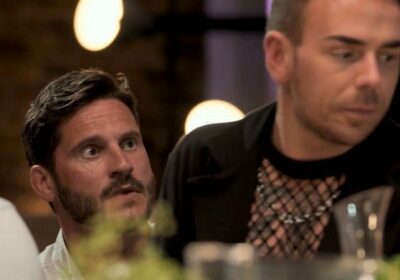 Married At First Sight UK 's second dinner party descended into chaos on Tuesday night as Thomas dropped a bombshell on the group and accused April of being a "liar".

During the latest instalment, the group came together where they had to drop suggestions into the Honesty Box to test each and every couple.

However, the drama went up another level towards the end of the episode when Thomas decided to clear up rumours after April, who missed the dinner party due to being ill, had previously told Chanita that he had been "s******g" her off, calling her a "snake" and "two-faced".

Speaking in a VT, Thomas said: "One thing I'm really wanting to speak about is April and her lies, you can stand up and say you want World Peace but at the end of the day, you're still a f**king liar!"

Thomas then sat Chanita down to clear the air and explain his side of the story, saying: "So, this is what I've heard, I don't want to say this really.

"April was crying, I went into the bathroom with her to console her, the minute we go in there, she said 'Chanita was a b***h' and that you were feeding information outside of the group.

Thomas added: "Your name should have never been brought up because you are a really lovely, beautiful woman, and I apologise."

However, Chanita pointed out: "But then now it's like, well, why has April said this? I'm just a bit like: 'What the f**k?'"

Speaking in a VT she added that she hoped Thomas was telling the truth and that it was a "weird situation" as April wasn't there to defend herself.

And things went from bad to worse when April's husband George decided to get involved as Chanita shouted: "Apparently your wife has been chatting s**t about me!" to which Thomas then declared he was leaving, telling George: "It's nothing to do with you!"

Chanita then told George: "So apparently it wasn't Tom b***hing about me in the toilet, it was April!"

He then stormed over to Thomas, who was tearfully telling the group: 'When it comes to Chanita, I did not say anything about her!", he the told George: "If it's to do with defending April, I'm not listening to it."

George added of April's absence: "There is somebody here that cannot defend themselves, so I tell you what, there is a great way for sorting this. Rather than doing it now and causing a problem in front of everybody else, who is having a lovely dinner party, there's no need for a conversation… I'm saying [let's do it] tomorrow."

To which Thomas snapped: "Someone has lied and my name has been dragged into it and I've given my truth. Now whether you believe that or not is entirely up to you, my darling."

George then warned: 'Let's have everybody in the same room to do this. We end the drama now and that's it!"

Married At First Sight UK continues at 9pm on E4.