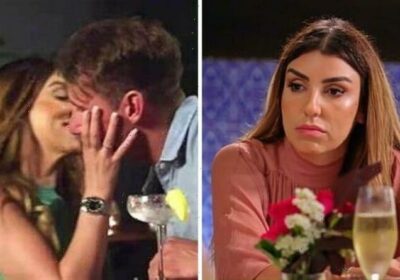 Season nine of Married at First Sight Australia served drama and arguments on and off-screen, with many of the couples not making it very far in their relationship. Accusations of cheating and stealing each other’s partners were thrown around between the couples, which caused a spicy reunion. Carolina and Daniel were one of the couples that had to fiercely defend their relationship after many viewed they cheated throughout the series.

Carolina and Daniel caused immense drama throughout the series, specifically when they announced they wanted to recouple and continue their experiment together.

However, the experts John Aiken, Mel Schilling and Alessandra Rampolla were all very much against it.

They appeared loved up together on the Today Show on Australia’s Nine Network and said they don’t “feel sorry” over what happened.

Carolina said: “Well, we never really had anything with our partners apart from a fake marriage and an experiment, really.

“It’s not like we had an emotional or physical connection with any of them, so we didn’t think we owed them anything.”

Daniel added: “We are in love, we live together, and we are just being ourselves.”

When the experiment began, Daniel was initially paired with Jessica Saracino and Carolina with Dion Gennarelli.

However, it soon became apparent that they were both unable to hide their connection with one another and shared their feelings at the commitment ceremony with the whole group.

The experts rejected their efforts to become a couple, and the whole room was filled with tension and awkward animosity.

Relationship expert John Aiken called the couple “smug and unapologetic” and exclaimed: “You don’t get it.

“The two of you simply do not understand the consequences of your behaviour. It showed us you are deeply insecure. You need to apologise. I want you to own it and be accountable.”

When discussing their romance, Daniel told the expert: “We are genuine and real about this experiment and how we feel about each other.

“So yes, there’s a part of us that would like to continue to experiment together.”

Carolina told her “husband” Dion at the reunion: “I am sorry for hurting your feelings, it was selfish, but um… I don’t regret it. I am happy, and I deserve it.”

Their fellow castmates had mixed reactions to their romance, with Ella Ding saying: “It was all so calculated and intentional. It’s a shame that’s their love story.”

The pair packed on the PDA, leaving Jack Millar to apologise for their behaviour to Dion: “I am so sorry you had to see that mate.”

Tensions were also high between Ella Ding, Tamara Djordjevic, and Mitch Eynaud after a revelation of a secret phone call was revealed.

Alessandra Rampolla questioned Tamara about an alleged phone call Mitch made to her the night before his wedding to Ella.

Confirming the rumours, Tamara explained: “Mitch was really drunk and called me at 2am. He said, ‘I know I shouldn’t be calling you right now, but I’m thinking about you.”

Stunned, Mitch clapped back: “Bulls**t! That’s crazy. You were not the only person I called.”

This ended with Tamara storming out of the reunion and sobbing in the hallway after being bombarded by her co-stars.

Married at First Sight Australia series 9 is available to watch on All4.