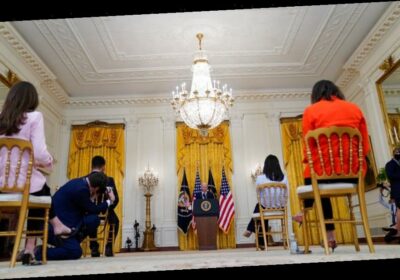 Fox News Channel doesn’t think Joe Biden’s White House is being very nice to them, and boy do they want their audience to know it.

A day after POTUS neglected in his first solo presidential press conference to call on the cable newser’s Peter Doocy, the White House correspondent and his pals on the anchor desk are still stewing over the matter – and tossing red meat to their viewers in the process.

“Absolute hogwash” was the term that John Roberts disgorged in on-air disgust today after White House Press Secretary Jen Psaki refuted claims that Doocy and FNC are being deliberately snubbed. This latest outrage follows extended bloviating on Thursday from various Fox hosts and Fox and Friends offspring and Doocy himself immediately after Biden’s much anticipated appearance in front of the White House press corps.

As you can see below, today, after asking questions about Biden’s history on filibuster reform in the Senate, Doocy brought his grievances directly to upcoming Fox guest Psaki. You’ll make your own opinion, but, in a back and forth that some other members of the White House press thought laughable, at least there is no doubt the Press Secretary thinks Doocy has nice socks.

“Can I offer an opinion here?” America Reports frontman Roberts said Friday after co-host Sandra Smith asked him what he thought of Psaki’s takedown in the briefing room earlier. “Like do I have clearance? Do I have clearance to do this? We’re good, OK.”

“One word for what she just said that I could say on TV: hogwash,” declared Roberts, a former White House correspondent himself from 1999 to 2006 for CBS and for FNC during the Fox loving Trump years. “Absolute hogwash. He has never been on the list,” Roberts added.

“He has only gotten questions when he shouted them at the president,” the ex-NewMusic VJ said of Doocy’s actual pretty common interactions with Biden over the campaign and since taking office. “The president has said on occasion, you know what? You always ask me the tough questions, but you know I like you. So go ahead, bring it on.”

In fact, Biden made a point at the end of a January 25 event of calling on Doocy directly and took questions and a follow-up from the FNC correspondent- as he has on a number of occasions.

Notwithstanding that reality, today Roberts, who was frequently called on by the former Celebrity Apprentice host in his formal, informal and whacked-out ventures in front of the media (known in the Trump years as “the enemy of the people”, BTW) went a bit off focus.

“He has not been on that list in the last administration,” Roberts said of Doocy, who was mainly covering Biden over last year’s campaign, not the Trump White House.

“The president certainly tore a strip off of MSNBC and CNN at every opportunity he could, which could be debated as prudent or not,” Roberts went on to say of Trump’s open dislike of reporters from the AT&T and Comcast-owned outlets.

“I think if you’re a member of the administration, they thought it was prudent,” Roberts continued, implying the Trump administration’s unsuccessful attempt to permanently strip CNN’s fact and jingoism checking Jim Acosta of his White House credentials in 2018. “As a journalist, I didn’t think it was prudent, but he called on them and he called on them more often than not, Doocy has never been on that list. So what she said today was absolute unadulterated hogwash.”

But of course, with Trump calling into Laura Ingraham’s show last night to slam Biden’s “disastrous” presser, hogwash riles up the base and that’s good business for the Rupert Murdoch-owned FNC.