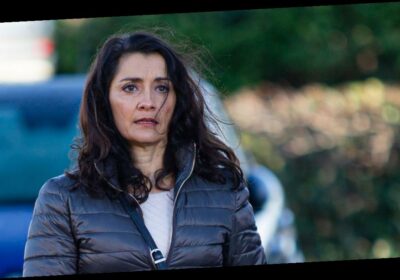 Emmerdale actress Rebecca Sarker has opened up about her ITV character Manpreet – admitting there are more twists to come for the doctor.

The starlet, 46, appeared on Friday's edition of Lorraine to talk about the never-ending string of twists and turns on the soap.

Viewers have already seen Manpreet's first blast from the past after Charles Anderson arrived in the dales.

Rebecca said: "Poor old Manpreet she will be having a tsunami of emotions.

"It is heart-stopping for her when Charles comes back.

"She is desperate to contain the fire but it creeps close to home and the reveal."

Refusing to rule out Manpreet may still have feelings for Charles, Rebecca added she hoped the public are invested in Manpreet and her husband Rishi as she is.

Rebecca continued: "As far as Rishi is concerned, I hope viewers are invested – they love each other.

"She is the Ruth to his Eamonn.

"The question is can he see his way past the lies.

"She is not the woman he thought he knew."

Rebecca added that despite her think-skinned persona in the village, Manpreet isn't as strong as some fans may think.

The star added: "She can fix problems as she is a doctor but then on closer inspection, she is just as flawed as the rest of us.

"There are going to be more revelations coming up about why, which will explain her behaviour.

"I hope the viewers will empathise. A lot went on. If not excuse but it will explain."

So far it's already been revealed that Manpreet led a double life a decade ago.

At the time she was posing as a lady called Saira to dupe Charles before leaving him for good.

After years of searching for her, Charles has now finally found Manpreet after presuming she was dead.

He is now demanding answers and is determined to get to the truth – no matter what drama he causes in the process.

Lorraine airs on weekdays at 9am on ITV.