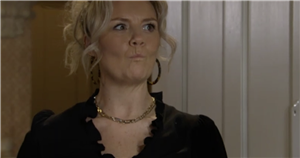 EastEnders fans have flocked to Twitter to speculate over Janine's next murder victim and some viewers are begging for it to be a fan favourite character.

Janine has been trying to seduce Mick Carter, played by Danny Dyer, who is very apprehensive.

She tried to hug him from behind as "things were getting slow downstairs" and said that she "didn't think anybody would even notice if they weren't there".

Janine cheekily asked Mick to "think of anything they could be doing" as she placed her arms around his waist but he stopped her in her tracks.

Much to her dismay, he made an excuse as to why he wasn't reciprocating the affection so she tried to cover it up by pretending she had to make a call.

The pair had an awkward conversation which ended with Janine leaving the kitchen and Mick with his head in his hands.

One viewer had an interesting thought: "We're way overdue a murder by Janine. Let it be Mick."

Another wrote: "Janine is really is so desperate for sex, it hurts."

A scathing fan tweeted: "This Janine wanting sex storyline is so boring."

Later on, Janine was in the cafe when Billy entered.

She was with her daughter that the time, who she told that they "could be living together by the end of the week".

Her daughter didn't seem enthused and Janine asked if she "wanted another bun," which she refused, so she went to go and speak to Billy.

Janine began to speak to him about the altercation and said that she thinks he's "going to get back with Linda" and that she "loves him" but "repulses him," which she "doesn't blame him" for.

Janine told Billy that she might be "rotten on the inside," to which Billy met her with silence.

She snapped at him to "tell her that she is wrong," to which he repeated that she "isn't rotten on the inside".

Janine then said: "My boyfriend can't stand me and my daughter wants to go with someone else!"

She then said that if the hearing "goes her way," then she will leave Albert Square as there is "nothing here for her" and there "never had been".