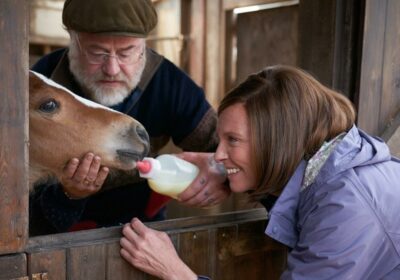 The 2015 Sundance-winning documentary “Dark Horse” was such an obvious candidate for an inspirational biopic that the question wasn’t whether it would be remade, but how well. Euros Lyn’s heartwarming “Dream Horse” doesn’t rewrite the genre, but it’s feel-good filmmaking of the sort many may be inclined to seek out at the moment. Although overly familiar and openly sentimental, it’s also an easy watch that’s gently appealing.

There were two breakout stars in Louise Osmond’s documentary: Jan Vokes and her racehorse, Dream Alliance. For the dramatization, Dream is played by seven horses while Jan is played by Toni Collette, so most of the movie’s focus stays on her. But that’s OK, because Collette is charming as an initially-wan resident of Cefn Fforest, a former mining town in South Wales.

Jan works a grocery checkout line during the day, tends bar at the local pub nightly, and then comes home to collapse with her unemployed husband, Brian (Owen Teale, “Game of Thrones”). Like their neighbors, Jan and Brian are exhausted, depressed, and barely scraping by since the mines closed. But when Jan overhears Howard (Damian Lewis) talking about horse racing at the pub, a spark ignites. 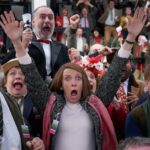 Jan has raced pigeons and whippets already, she figures; why couldn’t she do the same with a horse? As Brian points out, there are actually several reasonable answers to that question: She doesn’t have the experience, the money, or, for that matter, a horse. But she sets about solving each of these obstacles by forming a “syndicate,” which in her case means anyone in the village who can pull together 10 pounds a week to help fund the fantasy. And so this working-class crew raises a working-class horse, and all of them come together to challenge the toffs who consider the elite sport of racing to be their exclusive territory.

The syndicate, in traditional fashion, is composed of quirky types like the always-drunk elderly gent who loves to shock the upper crust before the races begin. There’s also a storyline about Jan’s elderly parents that’s meant to tug some additional heartstrings. None of these secondary plot elements make much of an impact, honestly, since both Lyn and writer Neil McKay — who share considerable experience in British television — view the film as Jan’s to own. 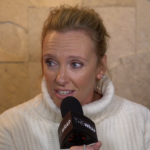 Osmond’s documentary was able to keep the inimitable Jan at its center while still allowing Dream and the syndicate to steal the occasional scene. But here, despite several high-stakes races shot with great emotion by Erik Wilson (“Paddington 2”), both humans and horse take a distant second place to Jan and her emotional transformation.

It’s especially disappointing to see Lewis sand down his edge so much that he can’t make a real impression. Collette is terrific, though, as is Teale as her unexpectedly supportive spouse. Benjamin Woodgates’ sprightly score keeps things moving along, and the well-chosen soundtrack — featuring Welsh bands like Manic Street Preachers, Catatonia, and Super Furry Animals — adds some welcome depth. But such a narrow dramatic focus, in such a predictable arc, does make for a rather slender film. 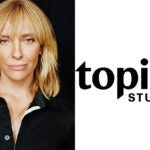 Then again, viewers drawn to a movie called “Dream Horse” (a notable change from that original title, “Dark Horse”) may well be looking for everything this movie delivers — charm, sincerity, and a rousing reminder that big bucks and breeding aren’t the only available route to the winner’s circle.

“Dream Horse” opens in US theaters May 21 and streams starting June 11.