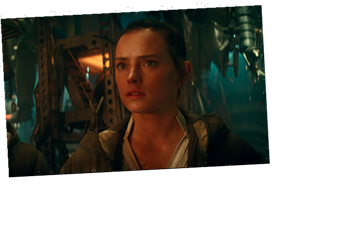 When informed by Yahoo Entertainment that Ted Cruz had recently dissed Rey Skywalker as “an emotionally tortured Jedi,” Daisy Ridley reacted with the perfect Cruz takedown: “I did not know, and I am very happy to be an emotionally tortured Jedi who doesn’t leave their state when it’s having a terrible time.” The “Star Wars” actress is referring to last week’s controversy over Ted Cruz’s decision to leave Texas and fly to Mexico as unprecedented winter storms left many Texans without power and heat.

Cruz originally dissed Rey as part of his reaction to Disney’s firing of Gina Carano from “The Mandalorian.” The studio parted ways with Carano over controversial social media posts, including one that compared the current U.S. political divide to Nazi Germany. Carano and Cruz are both Republicans from Texas, and Cruz decided to blast Disney in the aftermath of Carano’s forced removal from the “Star Wars” franchise.

“Texan Gina Carano broke barriers in the ‘Star Wars’ universe: not a princess, not a victim, not some emotionally tortured Jedi,” Cruz wrote on Twitter. “She played a woman who kicked ass & who girls looked up to. She was instrumental in making ‘Star Wars’ fun again. Of course Disney canceled her.”

Many “Star Wars” fans figured Cruz was alluding to Rey when he said “emotionally tortured Jedi” as the character spent the most recent “Star Wars’ trilogy overcoming the pain of being orphaned as a child. Cruz’s line about “a princess” appeared to be a knock on Princess Leia, the fan favorite character played by Carrie Fisher. While the “victim” was likely Natalie Portman’s Padmé Amidala. Arguably, that’s an overly reductive knock on both characters.

Since her firing, Carano has gone on to announce a new film project she is developing and starring in with help from the conservative website The Daily Wire. The actress also issued the following statement: “I am sending out a direct message of hope to everyone living in fear of cancellation by the totalitarian mob. I have only just begun using my voice which is now freer than ever before, and I hope it inspires others to do the same. They can’t cancel us if we don’t let them.”

Rey, meanwhile, is starring opposite Tom Holland in “Chaos Walking,” opening in theaters March 5 from Lionsgate. While the actress has said to “never say never” when it comes to reprising Rey in future “Star Wars” projects, she has long maintained she is happy taking a break from the space franchise for the future.