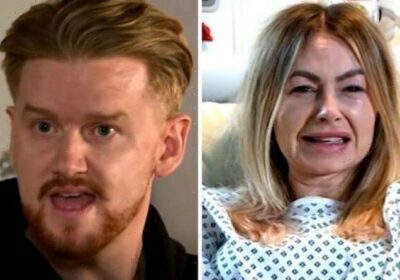 Coronation Street villain Gary Windass (played by Mikey North) killed Rick Neelan (Greg Wood) back in 2019 after being lured to the forest by the loan shark. Despite Gary lashing out in self-defence, he ended up covering up the crime and has kept it a secret ever since. However, in recent scenes, Gary was left in turmoil when Rick’s body was discovered by police. However, in a dramatic twist, Laura Neelan (Kel Allen) took the fall for Gary so the killer and his wife Maria (Samia Longchambon) could look after her daughter Kelly Neelan (Millie Gibson) once she is gone.

Initially, Laura was left devastated after learning what Gary had done and she did consider turning him into the police.

However, she had a change of heart when she thought about what would happen to her daughter Kelly when she died.

In scenes set to air next week, Laura will die after battling stomach cancer, but the only person who has continued to visit her in hospital was Gary.

Despite having a heart to heart with the villain, will Laura turn on Gary and expose him for the killing before she dies?

The actress who plays Laura appeared on Wednesday’s Lorraine to talk about her final scenes.

Kel went on to tease whether Laura could turn Gary into the police.

Speaking about how Laura has come to terms with the truth about Gary, Kel began: “I think if anything she was only interested in finding Rick’s money because she was looking for some security and stability for Kelly.

“I guess when she got this private investigator she just like, ‘We want to find him’ and as soon as they can’t trace him, they’re like, ‘It’s Gary Windass’.”

She continued: “It was a huge shock for her and if anything she was taken aback.

“She goes through all of these emotions and her initial thought is to go to the police and shop him until she realises that Kelly is happy with the family.

“And with Gary and Maria, Laura sees that she hasn’t been the best parent and she knows that they’re right for her.

“So, she decides to make the selfless act as a mum, finally because she never normally does anything but be a shocking mum, and she puts her daughter first.”

Speaking about how she prepared for the role and her exit storyline, the actress said: “I think most people and most mums and fathers, you always want to put your children first.

“I guess, with her dying and I am not saying she would take the blame for someone’s murder, people shouldn’t do that, but what I am saying is I can understand from Laura’s perspective as a character.

“She’s dying, she wants the security for her daughter and she’s putting her child’s needs before anything and that is a priority.”

Ranvir Singh chipped in to ask: “And will the truth be revealed at all before she dies?”

“Will it?” the Laura Neela star gasped as she teased: “Will Laura actually tell the police that Gary did it?”

“Kelly doesn’t want to see her, does she?” Ranvir asked as Kel replied: “No, she doesn’t that is the sad thing and as a viewer you watch it and we’re like ‘We all know Laura hasn’t done it.’

The host went on to point out Kelly will miss out on her final moments with her mum before Kel teased: “Yeah, but will she?”

If Kelly’s guilty conscience ends up getting the better of her, she could end up visiting her mum before she dies.

In doing so, will Laura expose Gary for the murder of Rick?

Lorraine airs weekdays at 9am on ITV.